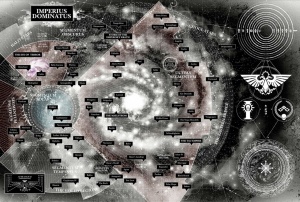 Galaxy map with the Eastern Fringe to the far east[6b]

The Eastern Fringe is the area of space located to the farthest galactic-east, where the light of the Astronomican does not reach.[3]

It is largely unexplored. It is known to contain a few dispersed and isolated human settlements, as well as alien civilisations, of which some are barbarous while others are highly advanced. It borders the Ultima Segmentum. It is said that the Necron Sautekh Dynasty is rapidly becoming a major threat to the Imperium from the Eastern Fringe.[1]