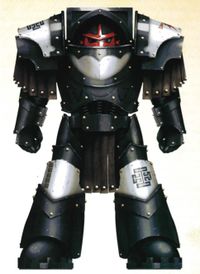 The Ebon Keshig were a formation of black-clad Terminators within the White Scars Legion. They were deployed within the Kharash.[1]

The Ebon Keshig served as a ritual post of atonement and redemption for sins and breaches of honour. The Legionaries who joined the Ebon Keshig were typically deployed in the van of sieges and other high-intensity conflicts, where they were expected to use their heavy armour as shields for others. In doing so, they atoned for their perceived sins through not only martial glory, but also the protection of their brothers. Those Legionaries who survived their service with the Ebon Keshig were deemed to have proven themselves worthy in the eyes of the White Scars and often returned to their previous posts or sometimes to other roles fitting their new mien.[1] 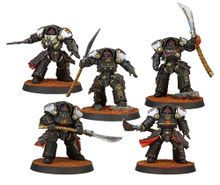