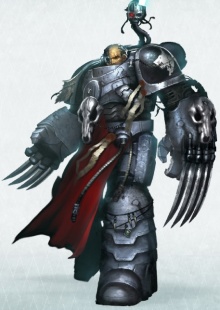 Egil Iron Wolf was a Wolf Lord of the Space Wolves, commanding the Ironwolves Great Company[1a].

Famed across the Segmentum Obscurus for his armoured companies of 'metallic beasts of war', Egil Iron Wolf's great company fields packs of Rhinos and Razorbacks which cut off lines of retreat whilst heavy Land Raiders and Predators rip apart the enemy. Egil himself is now more machine than man, an ugly 'cog-toothed' visage commanding his company. Whilst Harald Deathwolf may ride a great Thunderwolf into battle, Egil rides his own personalised Land Raider, a behemoth that still bears the original shields of his human household.[1a]

In 895 M41, Egil Ironwolf took the fight to the Athelaq sector. After much fighting the Iron Wolf was almost completely surrounded by the huge Waaagh! of Warboss Grimtusk Bloodboila. Only the north west quadrant, defended by a force of Eldar Aspect Warriors under the command of Autarch Elenduil prevented complete annihilation and kept supply lines open. The fury of Egil's tanks cripples the ork vanguard after many weeks and finally the Grimtusk is slain. Later, under parlay and as a peace offering Elenduil and his bodyguard of Striking Scorpions visit Eigil Iron Wolf in his throne room respectfully bearing the recovered bodies of fallen Space Wolves. Unfortunately, a mistranslation brings the mjod- soaked temper and honour in conflict with the pride and arrogance of the Eldar. Escalating quickly insults turn to drawn blades and a sudden fight. This gives enough time for the Orks to recover, regroup and 'elect' a new Warboss. The following three-way conflict wreaks more destruction than the original Waaagh! and the entire sector descends into violence.[1b]

In 897.M41 Egil and his Great Company fought alongside the Mantis Warriors Chapter in the Battle of Centius Prime.[3]

In 999.M41 during the Hunt for the Wulfen and Battle of the Fenris System, Lord Iron Wolf proved a key commander. He first defeated a Daemonic legion of Mordokh on Mydgal Alpha, then later fought alongside Logan Grimnar himself against the Infernal Tetrad on Midgardia[2]. Later during the Battle of the Fenris System, he came to Fenris' aid, when it was invaded by the Daemon Prince Magnus. However, when Egil fired upon the Daemon Prince with a Lascannon, Magnus froze the las-beam and pulled the Wolf Lord in front of his own shot, before letting it go. Egil suffered a direct hit and his body above the waist, was vaporized by the Lascannon's fire.[4] His command was succeeded by Orven Highfell.[5] 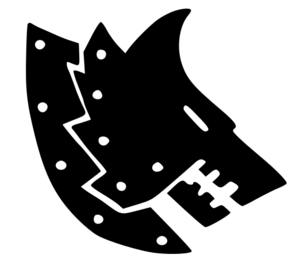 The Badge of the Iron Wolf

His chosen symbol is the Iron Wolf, symbolised by an angular wolf's head with rivets showing. The Iron Wolf in Fenrisian mythology lies dormant beneath Asaheim; a wolf so massive that the mountains represent the individual hairs on his back and the seams of metal his veins.[1a]

Those who bear the saga of the Iron Wolf are able to rile machine spirits into frenzy. Goading a growling engine of a vehicle can get more speed and distance from it. The machine empathy the bearer of such a saga has can also help it in healing systems and can help in battlefield repairs. [1c]

Before Egil chose the Iron Wolf as the totem of his Great Company he went by the name of Egil Silverhand.[1d]

Egil's Company bear a black shoulder pad with Egil's symbol- The Iron Wolf's head on it. It is the colour of Iron. On shoulder-pads with a trim or edging, the trim is also the same Iron colour. [1e]

Egil's Banner is the Iron Wolf rampant on a black field edged in Iron. It bears the Runes 'Opila' meaning heritage estate and possession and 'Hagalaz' which attributes honour or means hail. Hence a rough translation from the Eldar Furthark (or Proto-Norse) runes should identify the bearer of the runes as having great possession and material wealth either which gives him much honour, or he should be awarded much honour for it. The full heraldry is displayed on a banner in the red of the Adeptus Mechanicus. The bottom of the banner shows from left to right; a Wolf Guard honour marking of a paw print in a diamond shape displayed over runic liturgy, the silhouette of the hunter (a wolfs head face on), and and honour marking of a wolf skull with an Astartes combat knife run through it with runic script above. [1f]