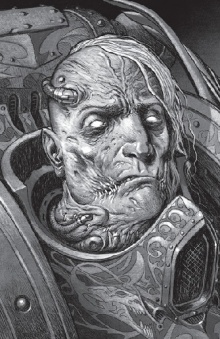 Eidolon was the first Astartes personally promoted to the rank of a Company Commander by Fulgrim, and his rise to the top of the Legion as a Lord Commander was accompanied by the growth of his reputation as a prime example of what it meant to strive to achieve perfection. He was commonly regarded within the Legion as the most proficient of the Lord Commanders, with a combat record that included excellent performance in sieges, holding actions and rapid assaults.[1] Eidolon looked to Fulgrim as a father-figure in a particularly intense way, and was subsequently unfailingly loyal to the Primarch. This, combined with the personality traits that come with overwhelming arrogance, led to his fall to Chaos during the Horus Heresy.[2]

When a Blood Angels force entered conflict with the Megarachnids on Murder, a distress signal was sent out.[12a] Eidolon led the Emperor's Children response, but his arrogance led to needless casualties. The Luna Wolves ultimately arrived and saved the Emperor's children, after which captain Tarik Torgaddon criticized Eidolon in front of his soldiers. Eidolon backed down, but swore to never forget Torgaddon's insult.[12b] Some time after the Cleansing of Laeran, Fabius Bile experimented on Eidolon and gave him the ability to yell at a destructive level; this ability presented itself during the Battle of Isstvan Extremis.[2]

In the aftermath of the Drop Site Massacre, Eidolon proved unable to deal with the ever-changing tempers of his Primarch as well as other senior members of the Legion did; his under-estimation of Fulgrim's newly highly capricious nature led to a terminal misstep when he chose to ask why Fulgrim proposed a plan of action, and wasn't able to verbally react quickly enough to soothe Fulgrim's resultant rage; indeed, what words he did manage to say in his defence inadvertently provoked his master further. In a blistering fury brought on by the belief that Eidolon was mocking him and planning to betray him, Fulgrim swiftly drew the anathame and slew his once-favourite Lord Commander. Eidolon's severed head was then passed over the victory wine of the legion's inner circle, the blood dripping from it being allowed to mix with the alcohol.[3] However with the approval of Fulgrim himself, Fabius managed to reattach Eidolon's severed head to his body and revive him. He later accompanied Fulgrim to Iydris, leading the ritual that saw his Primarch ascend to Daemonhood.[4]

After Iydris, the Emperor's Children scattered into disparate warbands as their Primarch became more concerned with the matters of the Warp. Eidolon managed to take command of a third of the Legion, which began to hunt the White Scars. During the hunt, Eidolon killed White Scars Keshig Captain Qin Xa but still proved unable to corner the loyalists at the Battle of the Kalium Gate. He later allied with Mortarion and a sizable contingent of Death Guard where they nearly destroyed the Scars in the Battle of Catallus. However the Scars again escaped, and this time Mortarion ordered Eidolon to track down Calas Typhon and bring the First Captain back to his fold.[6]

Lord Commander Archorian met with Eidolon above the chem-world of Horvia, asking him to meet on the surface to discuss the Legion command. Eidolon obliged, organising a counter-ambush to that which he expected from Archorian. Archorian believed Eidolon was excessively prideful and planning to usurp the Legion - indeed, Eidolon had mused that he wondered what it was like to have a primarch since Fulgrim had not been seen since Iydris. When Archorian came forth in person after unleashing a wave of chemicals that should have proved fatal, Eidolon and all his Kakophoni unleashed their death-scream to annihilate Archorian and his bodyguard of Phoenix Terminators. The purple of the Legion's armour was stained pink by the chemicals.[7]

When Fulgrim was forced to rejoin the traitor war effort by Lorgar, the Primarch let out a great cry across the Warp to rally the Emperor's Children back to his side. Eidolon was the first of these to answer the call, and the forces under his command quickly rejoined Fulgrim. Eidolon initially was part of Lorgar's conspiracy to usurp Horus as Warmaster, but when Fulgrim was freed from his bindings by Zardu Layak he quickly switched sides back to Horus along with Fulgrim himself. Eidolon went on to take part in the Siege of Terra.[10] During the planned assault on the Saturnine Gate, Eidolon was convinced by Abaddon to aid him in assembling the Emperor's Children for the operation. Through a process Eidolon described as painful and difficult, he was able to have Fulgrim himself lead the whole of the III Legion in the attack.[11b] At the battle on the walls of Saturnine, Fulgrim, Eidolon, and the elite guard of the III Legion assailed Rogal Dorn and Sigismund. During the fight, Eidolon proved to be the most powerful of Fulgrim's warriors but was thrown off the walls by Sigismund. Eidolon plummeted 1,100 meters.[11a]

A few centuries after the Shattering in 764.M34, Eidolon had re-established the Emperor's Children base at Canticle City on Harmony, which had been mostly destroyed during the Legion Wars. Here he styled himself 'Lord Commander Primus' and established the Phoenix Conclave. According to Eidolon himself, he had a dream in which Fulgrim appeared to him and told him to gather those in the Legion that still sought perfection. To that end, he began attempting to reunify the Emperor's Children and thinks by spreading enough entropy, true perfection may be born from the ashes. However, Fabius Bile suspects Eidolon's story of Fulgrim appearing to him is a lie.[9a] Nonetheless, he is said to currently rule one of the largest and most disciplined forces of Emperor's Children and is in an alliance with Abaddon the Despoiler.[9]

Rumours claim that Eidolon is responsible for hundreds, if not thousands, of gruesome raids on Imperial worlds in the past ten thousand years, and have suggested he may have served as lieutenant to Abaddon the Despoiler, consort to Queen Sylelle and champion of the Keeper of Secrets N'Kari. No Inquisitor has yet succeeded in locating the source of these rumours, but without indisputable evidence, the Inquisition will not declare Eidolon deceased.[1]

Eidolon is an arrogantly aggressive combatant, striking down his enemies with a single, contemptuous blow. His skill with the thunder hammer known as Glory Aeterna[13] earned him the title the Auric Hammer. The xenotech implants grafted into his neck by Fabius Bile grant him the ability to scream with a destructive howl capable of breaking bones and rupturing flesh.[8] 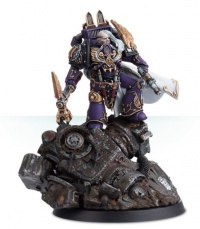