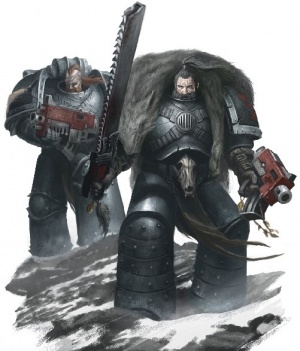 Members of the Einherjar

The Einherjar (blood-sworn) was the council of Leman Russ's Jarls and Thegns during the Great Crusade and Horus Heresy. Where possible, the council seeks out solid earth on which to stand, that they may face each other as equals in the event of an honour duel or ritual blooding.[1]

The first Einherjar were the honour guard of Leman Russ when he was still known as King Leman of the Russ before the coming of the Allfather. When the Allfather elevated Leman Russ and gave him command of the Space Wolves Legion, Russ decreed that his Einherjar would be the first Fenrisians to be inducted into the Legion.[2]

Although too old by the reckoning of the Mechanicum to become Space Marines, Russ would not deny them the chance. Many died, but some survived against the odds to become the first of the 13th Great Company, variously known as the Greybeards or Wolf Brothers.[2]

Known Members of the Einherjar