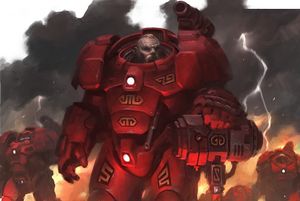 Einhyr Hearthguard are the elite Hearthguard of the Leagues of Votann. In battle they act as shock troops, bodyguards, and ship boarders.[3]

Selected from the most accomplished Hearthkyn and Theyns in a Hold, the Einhyr Hearthguard have many roles – from bodyguards to first-striking. Each Hearthguard has proved themselves over many years on the frontlines, ascending through the staunch meritocracy that defines the Leagures maintain. Like Hearthkyn, Hearthguard are dependable, but their experience and technology take their kinds natural durability to a whole new level. Squads are led by Hesyrs.[1]

Einhyr Hearthguard are clad in Exo-Armour and wield a variety of weapons from. Each is equipped with a Volkanite Disintegrator, EtaCarn Plasma Gun, and a shoulder-mounted grenade launcher as well as Concussion Gauntlets for melee combat, with many more choosing to add a Plasma Blade or Concussion Hammers to further its killing power. The Theyn of a Einhry Hearthguard squad is seen wielding a massive battle hammer.[1]

The exo-armour of the Einhyr Hearthguard is made from ultra-dense materials attached to a complex servo-assisted frame, allowing the wearer to shrug off anti-tank weaponry while retaining full freedom of movement and even auto-stabilising their aim while they return fire. The armor can also be equipped with Teleportation Crests[3] 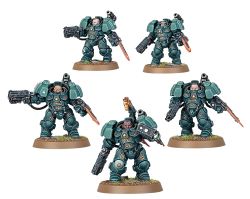 The name Einhyr could be inspired by Einherjar, literally "army of one", "those who fight alone". Einherjar in Norse mythology are those warriors who have died in battle and have been brought to Valhalla by valkyries.