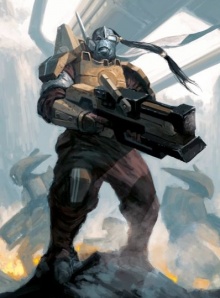 Sub-Commander El'Myamoto, more commonly known as Darkstrider, is a renowned Tau Pathfinder. Although regarded as a cunning tactician, his unconventional methods and disregard for protocol have caused much trouble and made him many enemies among the Tau Empire.[1][2]

Myamoto began his career as a Shas'ui born on T'au, passing his Trials by Fire but scorning the honor of donning a battlesuit. He was again offered an opportunity to wear one - a stealth battlesuit this time. However, he again rejected the offer. Instead, he preferred to return to the pathfinder teams with which he had first served. In this capacity, he became infamous for leading his Pathfinders into near-suicidal situations but still escaping with glory. On Dal'yth, he shut down strange Necron mechanisms, while on Nep'tan he hunted down a strange tri-headed beast that terrorized local mining colonies. During the Great Wars of Confederation, the grim leader earned the nickname Darkstrider after infiltrating Ork camps and using markerlights to pick out gargant components under construction. He has recently returned from battles against Imperial space marines in the Zeist Campaign.[3]

Myamoto regularly walks a fine line between insubordination and initiative, regularly spurning Tau commanders. However, Commander Shadowsun values the sly tactics and bravery of Darkstrider and stated that she values working with him.[3]

Myamoto has a special Structural Analyser in his armour that helped him to spot hidden weaknesses in enemies.[4] He also wields a Pulse Carbine he refers to as Shade.[5]