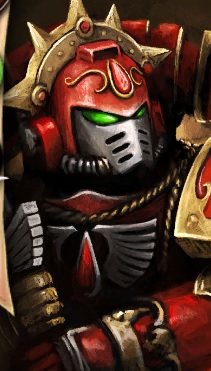 Elai Jannus was the renowned Archein of the Blood Angels Legion's 202nd Company, during the Great Crusade and was known the Crimson Oracle, due to his strategic insight[1a].

He took part in the Battle of Signus Prime, where he commanded the Heavy Cruiser Ifrit Nine, when the Legion's fleet was attacked by swarms of Daemon-possessed ships above the world. The Blood Angels' warships formed a defensive formation against the Daemon ships, but due to the treachery of their allies, the Word Bearers Unseen Hand Company, their strategy failed. Unbeknownst to the Blood Angels, the Word Bearers had turned upon the Imperium and allied themselves with the Chaos Gods, which led the Unseen Company to move their Cruiser, the Dark Page, away from the Blood Angels' formation. Doing so allowed three Daemon ships to reach the Legion's flagship, the Red Tear, whose crew did not realize what had happened. Archein Jannus had however and he immediately ordered the to ram the Daemon ships and successfully rammed one of them. Unfortunately this sent both ships plunging down onto Signus Prime, though Jannus and some of 202nd Company were able to escape in drop-pods before the Ifrit Nine crashed. The same fate would befall the Red Tear, after it was rammed by one of the Daemon ships and crash landed upon Signus Prime[1b]. Jannus and his Company were well away from the Red Tear and thus played no intimidate part in the Blood Angels' battles against the world's Daemon hordes, but the sound of fighting drew the 202nd to their brethren. As they marched though, their Legion was enveloped by despair and madness, after their Primarch Sanguinius was severely wounded at the hands of the Bloodthirster Ka'Bandha.[1c]

The 202nd Company was also affected by this, but they began chanting the Legion's Liturgy of the Blood, which somehow shielded them from the madness. When the Company finally reunited with their Legion, it was with the forces of the recently slain Archein Betric Sizal, which had been devastated by attacking Daemons and the traitorous Unseen Hand Word Bearers. Seeing their former allies turn upon them, did not give pause to the 202nd Company and Jannus led them in a devastating attack against both them and the Daemons. Sizal's remaining forces soon joined them and together they destroyed the Word Bearers and Daemons near them. Afterwards, Sizal's forces told Jannus of the Primarch's plan to attack the Cathedral of the Mark, which he believed was a base of operations for their enemies. Jannus agreed to continue Sizal's task of bringing the surviving artillery vehicles and Dreadnoughts, close to the Cathedral so that they could bombard it. He would succeed in doing so and the bombardment of the artillery and Dreadnoughts took a devastating toll on the Daemons near the Cathedral. This allowed the Blood Angels' main force, which had been driven mad by Sanguinius' fall, to storm the Cathedral and bring about the final stages of the battle. The bombardment though, caused the Daemons to repeatedly attack Jannus' forces, which fought to defend the artillery vehicles and Dreadnoughts[1c]. After the Blood Angels finally defeated their foes however, they discovered that aside from one survivor, the Daemons had killed Jannus and his forces[1d]. As the Blood Angels then later began to leave Signus Prime's System, the Legion honoured Jannus and the 202nd's sacrifice by creating a large memorial dedicated to them aboard the Red Tear.[1e]