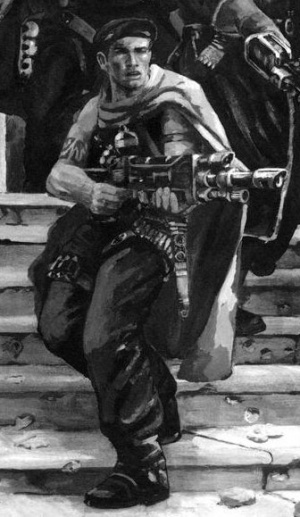 Major Elim Rawne was the second officer of the Tanith First and Only Imperial Guard regiment during the Sabbat Worlds Crusade.[1a]

A fearsome fighter, Rawne is chiefly known for the long-standing murderous hatred he possessed towards his commanding officer, Ibram Gaunt. Promoted to Major from the rank of standard Guardsman after the Fall of Tanith, Rawne appeared to retain this rank even after the death of the regiment's Colonel and his assumption of many of the Colonel's duties.

Rawne was born into a wealthy mercantile family on Tanith but, as his parents' third son, his prospects for inheritance were low so he joined the Tanith Attica Militia as a junior officer instead, before being mustered into the Imperial Guard. It is rumoured that Rawne may have committed murder and joined the Guard as a dog-trooper to escape the Arbites[Needs Citation], but while Rawne has admitted that he ran a black-market business while in the militia, through which he met Murtan Feygor, he has so far remained non-committal on the rest of the rumour.[1d]

Initially a standard Guardsman, Colonel-Commissar Ibram Gaunt promoted Rawne directly to the rank of Major after the Fall of Tanith[2a], with Rawne commanding the regiment's third platoon.[1c] In spite of this rapid promotion by his commander, Rawne fostered a hatred of his CO for many years[1d][3], blaming him for the destruction of his home-world and coining Gaunt's sometimes nickname, 'Ghostmaker'.[2a]

Rawne himself has been variously referred to as 'the snake' or 'Toxic-Eyes' behind his back.[Needs Citation] Despite Rawne being enlisted with the guard, he still conducted illegal dealings on the side, often being aided by Feygor (who officially served as Rawne's adjutant within the regiment). In particular, he was known to buy and sell illicit goods, including drugs and pornography.[1b]

Rawne's hatred of Gaunt drove him to assault the man during one of the regiment's first actions, an incident from which he was lucky to escape from without significant consequence.[2a] He later had the opportunity to let Gaunt die during a mission on Typhon Eight, but chose to save him instead, his reason being that he owed Gaunt his life; saving Gaunt in return would even the score and allow him, according to his own twisted sense of honour, to consider killing Gaunt with a clear conscience.[2b] Rawne would later confide in Gaunt while the latter was in a coma after a duel with Heritor Asphodel on Verghast that he did not want Gaunt to die to the enemy, if only so that Rawne could kill Gaunt instead.[3] Their relationship gradually softened over the years, with the two finally forging a strong bond during a traumatic mission on the Chaos-held planet Gereon.[7]

Rawne was captured by the Jantine Patricians during the feud between the Jantine and the Tanith[1d], and tortured by their sinister ally, Inquisitor Heldane[1e], although he later got his revenge by killing the human puppet that Heldane's consciousness had taken root in[1f], inflicting fatal feedback damage to the psychic Inquisitor.[1g] The psychic torture that Rawne suffered seemed to make him more aware of psychic activity than other non-psykers, but also more susceptible to being mentally controlled himself. This became a particular concern on Herodor, when he was almost coerced into attempting to kill the Beati.[6]

Following the Siege of Vervunhive, the First and Only received an influx of new Verghastite recruits. Although Rawne had a higher opinion of the Verghastite Guardsmen than some of the Tanith did, he was initially still mistrustful of a number of the recruits - notably the women (prior to this point, the Tanith First had been an all-male regiment).[4a]

When the regiment was deployed on Hagia, Colonel Corbec was captured by the Infardi.[4b] Although he was able to escape and meet up with a Tanith rescue squad[4c], Rawne became acting first officer of the Tanith First while Corbec recovered from his injuries.[4d]

Although normally adept at escaping injury, Rawne was badly wounded during a trench-fight on Aexe Cardinal and was forced to spend a significant period recuperating. During this time he began a relationship with Sniper Jessi Banda,[5] which was terminated by his enforced absence on Gereon. Upon his return to the regiment he discovered that Banda had transferred her affections to Captain Flyn Meryn, but did not seem particularly put out.[8] Rawne has admitted that he has few friends in the regiment, but he did consider Dermon Caffran and particularly Murt Feygor close comrades. Feygor's death on Ancreon Sextus was one of the only instances where Rawne has seemed genuinely upset.[8]

With the death of Colonel Colm Corbec, Rawne effectively became the second-in-command of the regiment, and in fact led it for a time during the Jago campaign, when Gaunt was believed killed in action.[9] During the Tanith 1st's year of sabbatical on Balhaut Rawne fell back into his old criminal ways, impersonating an Inquisitor in order to rob an illegal gambling den named Zolunder's. This plan backfired when Rawne and his crew were caught by the actual Inquisition (whom nobody expected), but they were able to escape imprisonment at Section when the Archenemy staged an attack on the building and returned to Zolunder's for shelter, defending it against a rival gang who came to attack its owner. Later, they were among the few Tanith troops in a position to help Gaunt when the Blood Pact kill-team closed in on the enemy defector Gaunt was guarding, and Rawne executed a shapeshifting Chaos agent posing as Inquisitor Handro Rime.[10]

During the mission to Salvation's Reach, Rawne and the first squad from his company, B, formed a close-protection detail assigned to guard the enemy defector, Mabbon Etogaur. They named themselves the 'Suicide Kings' after a regnal bodyguard unit from Tanith's history,[11] which Rawne at first thought was clever but later came to regret after most of the unit was KIA.[12] En-route to Salvation's Reach another enemy shapeshifter posed as Rawne in an attempt to kill Mabbon, but was driven off and ultimately killed.[11] Once the Ghosts arrived at Urdesh, the Suicide Kings handed Mabbon over to the Inquisition and Rawne took command of the regiment for the second time, receiving the brevet rank of Colonel before leading them through an intense battle near the Tulkar Batteries in the city of Eltath while Gaunt was stuck at the palace.[12] After the enemy's inexplicable retreat, Gaunt deduced that they had a greater plan at work and sent the Suicide Kings to collect Mabbon from the prison where he was being held, only for them to be ambushed by a team of Sekkite Qimurah. Outclassed by the enemy elite, most of the Suicide Kings died trying to get Mabbon out of the prison complex, and Rawne himself was shot through the abdomen. The mission ultimately failed when Mabbon and the final Qimurah killed each other in a close-combat brawl, but a conversation between the two revealed important intelligence regarding the eagle stones, which Rawne was able to pass on while recovering from his wound.[13]

A handsome and even (when he wants to be) charming person on the surface, Rawne is in actuality a very dangerous and callous man. Always at the forefront of Gaunt's plans due to his uncaring efficiency and tactical insight, the Major is a notably ruthless (to the point of being in favour of abandoning or mercy-killing the wounded) officer. He originally opposed the inclusion of women in the regiment, acknowledging their combat skills but fearing the disruption their presence would cause, and only relented on the issue after everybody got sick of hearing his complaints. He was also generally biased towards the Tanith Ghosts, forming the original Suicide Kings almost entirely from Tanith soldiers, but again relented when attrition forced him to draw from Verghastite and Belladon troops as well. Whilst not particularly more skilled than the average trooper in combat (at least before Gereon), Rawne is often picked for high-risk insertion missions where his prowess with stabbing weapons and explosives can come to the fore.

For a long time, Rawne held in infamous grudge against Gaunt for leaving Tanith to die, and indeed tried to kill him for it during the Ghosts' first battle on Blackshard. The unquestioned leader of the Tanith malcontents who felt the same as him, Rawne was often a thorn in Gaunt's side during the early years and ran black market operations within the regiment. However, Rawne and Gaunt's relationship changed during their two years on enemy-occupied Gereon, as the intense pressure of living on the run forced them to rely on each other and they came to appreciate each other's strengths. Though their relationship remained complex after Gereon and they are unlikely to ever be called friends, Rawne and Gaunt learned to trust each other, and Rawne's place in Gaunt's inner circle was no longer simply out of necessity due to his rank.

As with many of the Tanith, Rawne has a tattoo - in his case, a blue starburst around his eye.[1e] 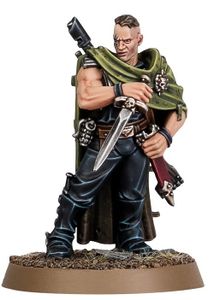