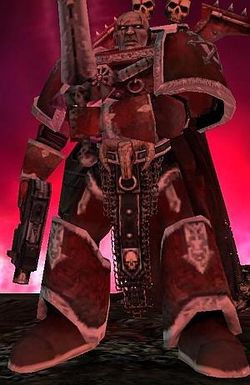 Eliphas at the beginning of Dark Crusade. 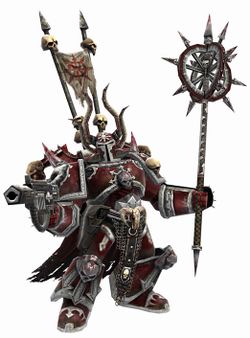 Eliphas the Inheritor was the Dark Apostle leading the Word Bearers on Kronus during the Dark Crusade. While thought to have been killed at the end of that campaign, he returned during the Second Aurelian Crusade as a champion of the Black Legion.

Eliphas was known to be already present on Kronus during the events of the Horus Heresy, where he participated in a battle against the Ultramarines as a young Champion of Chaos.[1]

Later, during the opening phases of the Dark Crusade, Eliphas and the Word Bearers were summoned back to Kronus by a Chaos cult at the Third Temple of Black Succession in the far south of the Deimos Peninsula. This cabal had turned to Chaos in light of their experiences with the recent rise of the Necrons on Kronus, and Eliphas had answered. Using the knowledge gained from The Book of the Epistles of Lorgar, their leader Virgilius planned to bring Eliphas to Kronus. On the eighth night of their visit to the Temple, Virgilius led them to the great chamber at the temple's heart, where he and eight of his cultists were sacrificed on an icon of Chaos. The Warp opened between the points of the eight-pointed star and Eliphas stepped forth, heralding the beginning of the Ninth Inheritance.

Eliphas came to Kronus to turn the planet into a Daemon World, and would go on to lead the Word Bearers against the other six factions all vying for supremacy on the planet. He began his conquest from the Daemon Gate situated in the Deimos Peninsula on the tropical southern coast of Kronus. Of all the powers on Kronus, barring the Blood Ravens of the Adeptus Astartes he despised the Necrons most as they had no souls to be devoured by his gods.[1]

He was armed with an Accursed Crozius and over the course of the conflict, gained new equipment to enhance his powers, such as Daemonic Armour and the same helm worn by the Word Bearers Primarch Lorgar 10,000 years previously during the Horus Heresy.[1]

Throughout the Dark Crusade, Eliphas was given ample opportunity to gain favour with the four Chaos Gods and other Chaos figures through the defeat of his enemies.

Deimos was eventually conquered by the Blood Ravens.[2] Eliphas was last seen trying to explain his failure to an unnamed Daemon Prince. The Daemon Prince declared that Eliphas was past redemption and refused to send him to the Basilica of Torments again, opting to destroy him outright instead, claiming that "It is a poor shepherd who blames his flock, Apostle. This failure is yours and yours alone." Eliphas attacked the Daemon Prince, but was lifted into the air by the Prince's power, and exploded in a huge gush of blood.[1]

Eliphas reappeared as a champion for the Black Legion against the Blood Ravens on planet Aurelia, having been somehow resurrected. He led a warband together with Araghast the Pillager, but later deserted him, causing Araghast's death and leaving Eliphas as sole commander of the warband. He was later defeated by the Blood Raven Aramus. As punishment, Eliphas was tortured by Abaddon the Despoiler, promising through his pain that he would succeed in corrupting the Blood Ravens.[2]

Eliphas returned during the Third Aurelian Crusade, this time in Terminator Armour. He was sent by Abaddon to claim the souls of the Blood Ravens and the population of sub-sector Aurelia.[3]

As a result of his unexpected popularity, Eliphas returned in Chaos Rising, in spite of his death at the end of the Dark Crusade.[2]

If the Chaos faction wins in Warhammer 40,000: Dawn of War II - Retribution, Eliphas is elevated to the status of Daemon Prince after Azariah Kyras's death.[3]

During the Blood Ravens campaign, Eliphas is confronted and killed early in the game.[3]