Elucia Vhane, known to the Inquisition as the Mistress of the Black Flag, to the Eldar as Faollgael (meaning huntress/she-wolf), and to the Orks as Da Feathered Deff, is an Imperial Rogue Trader.[1]

Elucia Vhane is a Rogue Trader of great renown. Used to life on the lawless frontiers of the Imperium are prepared for any threat such as mapping uncharted regions of space, searching for new worlds to inhabit, or bounty hunting. Born to the old Rogue Trader Vhane dynasty dating back to the 32nd Millennium. Under her families training she quickly became an innate leader. However she has since left her family behind, though it is unclear why. Even by the standards of the High Lords of Terra, Elucia is old at over 500 Terran years, kept in prime health thanks to the rejuvenant Adept Sanistasia Minst[1]. Shortly after the Realm of Ultramar was saved from the Plague Wars, Elucia was among a group of Rogue Traders that were contacted by Lord Commander Guilliman, and tasked with finding new uncorrupted worlds for the Imperium to colonize. Despite the dangers and likely death they would be facing, all the Rogue Traders agreed with Guilliman's proposal. Several days later, the holds of the Rogue Traders' ships were filled with colonists[2a] from the Realm of Ultramar, whose worlds had been ravaged during the Plague Wars[2b], and they set off to travel beyond the Eastern Fringe - the most likely place to find unclaimed habitable worlds. Elucia had an advantage over the others though, as she had stolen a holo-map from her Dynasty's vaults, which showed the location of a fabled resource-rich star system. The map was dated from the Dark Age of Technology and though her Dynasty had possessed it for sometime, their many attempts to reach it failed, due to raging warp storms blocking their path. According to Elucia's sources however, the creation of the Great Rift had cleared away the warp storms and the path to the fabled star system was open. Because she feared keeping a large fleet together through multiple warp jumps would be impossible though, Elucia took only her flagship New Dawn on the long journey ahead of her.[2a]

Thirty years would pass, as the New Dawn traveled in the Warp to reach her destination, but when the ship finally emerged, Elucia knew she had found what she sought - an entire star system of untouched inhabitable worlds. The readings of one world in particular showed it to be the most verdant Elucia had ever encountered and she chose it be the first to be laid claim to. After naming the world Arcadia Neos, she prepared for the long process of waking the stasis held settlers, so they could begin colonizing their new home[2a]. Elucia and her crew then surveyed Arcadia Neos and after finding it was safe for the settlers to colonize, she ordered that a message detailing their success be sent to the Ultramarines Chapter at Macragge. In the period that followed, the settlers and crew ferried down to Arcadia Neos, while the New Dawn's engine-master and his enginarium crew remained aboard to deal with a malfunction in the ship's warp drive, that had occurred on their long journey. Using prefabricated buildings, the new settlement on Arcadia Neos began to rapidly take shape, and Elucia began to plan other colonies, as well as explorations of the world's moons. However disaster struck when one night, unnatural beasts emerged from one of the prefab buildings, and drained a dozen settlers of blood, before the creatures were hunted down. Sanistasia Minst's autopsies of the beasts, revealed that they were not indigenous to Arcadia Neos, and were instead nothing more than common human parasites - mites, borer-flies and the like - grown to abnormal size. Worst of all, the creatures' signatures were traced back to the New Dawn.[2c]

On a slight but nagging suspicion, Elucia gathered a hand-picked team of her Starstriders aboard the transport shuttle Truehawk and returned to the New Dawn. Though they found nothing amiss at first, they soon found that the New Dawn's engine decks had been corrupted and had taken on a flesh-like appearance. They then found more of the creatures that had attacked on Arcadia Neos and finally discovered the source of the corruption within the ship's engine room. The New Dawn's warp engine had somehow become a tumorous fleshmass, that now pumped vile fluids throughout the ship. After seeing this, Elucia ordered a hasty retreat back to the Truehawk, as the mutated forms of the enginarium crew emerged to attack them. Once her team had safely boarded the Truehawk and exited the holds of the New Dawn, Elucia punched in the code to activate her ship's remote self-destruct function. As the data transmitted though the Truehawk's klaxon blared, as mutants emerged from the shuttle's innards. What followed was a desperate battle for survival, as Elucia gave the ordered her crew to make for the Truehawk's escape pods[2c]. The pods containing Elucia and her crew that managed to escape, then landed upon the settlement on Arcadia Neos, but they were followed by mutants that had escaped from the Truehawk and New Dawn as well. Elucia's escape pod then crashed through the roof of a Adeptus Ministorum shrine, but because it had been damaged when it left the Truehawk, the pod's doors refused to open.[2d]

She desperately tried to open them, but they would not budge and Elucia knew she was now an easy target for any mutants that were nearby. She was proven correct, as the mutants were making their way to the shrine, under the sway of their leader Vulgrar Thrice-Cursed, the New Dawn's former engine-master, who sought revenge for the loss of his beloved warp engine and the mutants that had perished with it. Luckily for Elucia, her crew raced to her location and found her escape pod, even while the mutants poured into the shrine. Though they were vastly outnumbered, the Rogue Trader's crew fought fiercely to defend her and reaped a great tally for everyone of their number that fell to the mutants. As the battle raged on, Elucia was finally able to free herself and joined the fray with her rapidly depleting crew. The end finally came, when Elucia killed Thrice-Cursed and then rallied her crew to hunt down any surviving mutants to prevent them from spreading their sickness to the colonists. As the crew began to hunt the mutants down, a weary Elucia looked upon the wrecked shrine and felt a stab of anger and despair. The colony on Arcadia Neos had been meant to be a seed of hope, not another seed of doubt the Imperium did not need. Worse still, it would be months or years before the Ultramarines arrived at Arcadia Neos[2d], and the Rogue Trader's body had long ago begun resisting the ‎rejuvement treatments, Sanistasia Minst had been giving her...[2a]

In combat, Vhane wields a bejewlled cane-rapier known as Blur which has a built-in monomolecular blade. She also wields an antique pistol dating back to the Dark Age of Technology. For protection, she wears a corset installed with Disruption Field generators.[1] 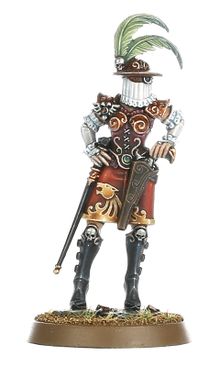