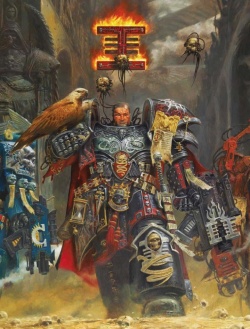 Emil Darkhammer is a Puritan Monodominant Inquisitor of the Ordo Xenos and the arch-enemy of Radical Inquisitor Helynna Valeria. A strict Monodominant, Darkhammer views all alien technology as an affront and threat to humanity.[1]

In pursuance of his extreme creed of purity that goes with his Monodominant philosophy, Darkhammer has enacted Exterminatus on over thirty worlds. Sometimes this has been to end wars, corruption, or plague, but also sometimes to destroy a mere handful of insurgents or aliens or obliterate a single Warp-tainted artifact sought after by his Radical colleague, Valeria. His actions have polarized the Inquisition, with some viewing him as a beacon of righteousness while others see him as only slightly less destructive than the Daemons of the Warp. Only on a few occasions has Darkhammer stayed his hand, most notably after the First War of Armageddon. There, he commuted an Exterminatus order to a program of mass-execution and mind-wipe, largely because he feared retaliation from the nearby Space Wolves.[2]

More recently, Darkhammer has become determined to stop his nemesis Helynna Valeria from uncovering the Xenos artifact known as the Dimensional Forge, a device capable of creating a null zone light years in diameter that Daemons could not penetrate. Darkhammer would issue an Exterminatus order to the Hive World of Cavlock after he discovered Valeria suspected the Dimensional Forge was hidden there. Using the pretext of preventing a Daemonic incursion from spreading, Darkhammer condemned billions to death in order to foil Valeria. Valeria has since declared Darkhammer Excommunicate Traitoris and has hunted him across Segmentum Obscurus to seek revenge for the destruction of the Dimensional Forge.[1a]

Later, on Mindo Station, the Acolyte warbands of Valeria and Darkhammer came to battle. The fight lasted a day and a half until Darkhammer and his forces escaped aboard a starliner.[1b]