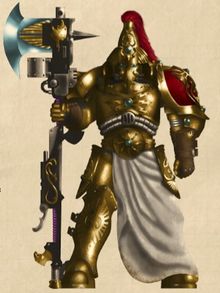 The Emissaries Imperatus are a sect of the Adeptus Custodes.[1]

The Emissaries Imperatus (also known as the Heralds of the Golden Throne) are members of the Adeptus Custodes who have heard the Emperor's voice during their meditations, and now feel his hand guiding them to enforce his will. They then band together in like-minded groups and, through discussion and meditation, interpret what it is that the Master of Mankind wishes them to do. With the tacit approval of the Custodes' Captain-General, the Emissaries bear the Emperor's words across the Imperium to Commanders who must hear them, or occasionally unlock some ancient device from the Imperial Palace's vaults and bequeath it to whichever champion can wield it best. Their words have redirected entire Crusades, and seen threats intercepted and archeotech riches won that might otherwise have passed the Emperor's servants by. For thousands of years small numbers of Emissaries Imperatus have been seen abroad, but were rarely encountered. This dramatically changed however, with the creation of the Great Rift and the launching of Guilliman's Indomitus Crusade, which many of the Emissaries Imperatus have joined. The Emissaries have also helped Guilliman with paving the way for the Imperium's acceptance of the Primaris Space Marines; first by convincing resisting members of the Adeptus Custodes, who feared strengthening those who might once again rebel against the Emperor, and then by ensuring that even the most traditional Space Marine Chapters accepted the Primaris warriors into their ranks.[1]