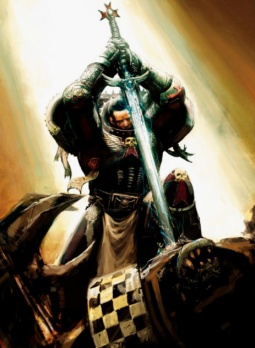 The Emperor's Champion slays an Ork [6]

The Emperor's Champions are elite warriors of the Black Templars. These champions usually seek out champions of the enemy and challenge them to single combat, just as Sigismund first did during the Battle of Terra during the Horus Heresy.[1]

On the eve of battle, the Black Templars spend their time in meditation. It is alleged that at this point one of their number will be visited upon by a vision of the Emperor, guiding him to victory, he then presents himself to the company Chaplain for scrutiny. The Emperor's Champion is permitted to bear powerful artefact's from the armoury, namely the Armour of Faith and the Black Sword. Before battle, the Champion also leads the Templars in renewing one of the four Vows, each one adding a different effect during battle as it in stills the Black Templars with righteous fury. Those vows are: "Suffer Not The Unclean To Live," "Uphold The Honour Of The Emperor," "Abhor The Witch, Destroy The Witch," and "Accept Any Challenge, No Matter The Odds".

In battle he goes out to fight the enemy in the name of the Emperor. His presence serves as a fantastic inspiration to the rest of his battle-brothers, leading the whole battle-group to feats of prowess beyond that of even normal Space Marines and even if the champion dies on the battlefield (which is a bad omen) , his name and deeds are recorded and remembered for the rest of time. By tradition, there is only one Emperor's Champion for the entire chapter, but in practice there is usually one Champion per Black Templar Crusade.

History of the Tradition

The tradition of the Emperor's Champion dates back to the time of the Horus Heresy before the inception of the Black Templars. The first Emperor's Champion was First Captain Sigismund of the Imperial Fists Legion. The Primarch Rogal Dorn bestowed upon him the new title during the attack on the Imperial Palace, where he served victoriously. The practice of the tradition remained with Sigismund after his separation from the Imperial Fists to become the Black Templars first High Marshal.

Though most sources state that the Emperor's champion is a role unique to the Black Templars in the 41st Millennium, they have also been reported in other Chapters, usually Imperial Fists or their successors.

Seventh Retribution (Novel) includes an Imperial Fists Emperor's Champion in the Battle of Opis. Additionally, this novel indicates that the role is something that is competed for, rather than being granted based on visions had by the Space Marines.[2]

The Crimson Fists have also been recorded as using an Emperor's Champion; though far less frequently than the Black Templars. However since the Invasion of Rynn's World, which devastated the Chapter, none amongst them have been gifted with visions of the Emperor. This may be connected with the explosion that destroyed the Chapter's Fortress Monastery, during the conflict with the Orks, and which likely destroyed the Crimson Fists' ancient and sacred vestments of the Emperor's Champion.[4]

The Blood Ravens also make use of the Emperor's Champion, by choosing a veteran Battle Brother within their Chapter. Their Champion wields the Thunder Hammer Deliverance and the Storm Shield Repudiation in battle; armaments known in the Chapter as the Holy Arms of the Champion.[3]