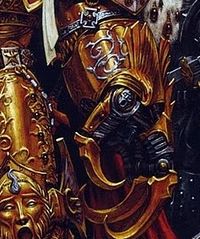 The Emperor's Lightning Claw is an as of yet unnamed Lightning Claw that was usually seen on the Emperor's left hand during the Great Crusade and Horus Heresy. It varies in depictions, having anywhere between three[1] to five[2] digits.

It is uknown what ultimately became of the weapon, as contemporary art of the Emperor does not depict him with it.[3]