The Emperor's Warbringers are a Codex Space Marine Chapter. The Chapter is known to camouflage their vehicles.[1]

The Warbringers are unusually deliberate and circuitous for a Space Marine Chapter. Where other chapters often arrive on a battlezone with drop pod assaults and other fanfare, the Warbringers believe in preparing their ground first, for weeks or months if necessary. They make extensive use of scout squads to reconnoiter enemy territory and identify key targets, while ensuring that the enemy remains unaware of their presence. Only when the moment is right, and all elements are in place, do the Warbringers strike, with every tool in the Space Marine Armoury, aiming for a single, decisive action that will end the conflict.[2][3] 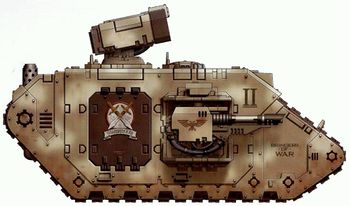