Empire of the Severed 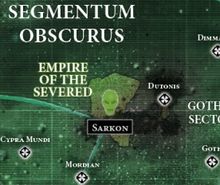 Empire of the Severed territory[2]

The Empire of the Severed is a Necron Dynasty based from the Tomb World of Sarkon but has since absorbed other worlds into its fold. As a result of radiation storms, the memory banks of every Necron interred within were wiped, rendering them mindless.

Not realizing its own systems had also been damaged, the master program of Sarkon observed the quiet order it had brought to Sarkon and resolved to carry it to other worlds. The Master Program has since become a Necron Overlord known as the Sarkoni Emperor. The Severed have since absorbed the Tomb World of Takarak, overwhelming its defenses and absorbing it, along with three other Tomb Worlds, into its fold. The Sarkoni Emperor has since begun to extend its will across other, non-Necron worlds, using Mindshackle Scarabs to bring any unruly creatures under its direct control.[1]

There are now reports of Necron armies issuing from Severed territory in great number, ethereal after-images dancing about their bodies as they seem to be driven by a single god-like will. These reports have led them to be dubbed the Haunted Legions.[3]