Enginseers are highly trained members of the Cult Mechanicus and are dedicated to the maintenance of Imperial technology. Through many years of study they have gained the knowledge of the rituals and litanies that form the body of machine lore, as well as a deep understanding of the more practical disciplines of mechanics and electronics. In this role they serve across the galaxy, often in harm's way, as they will be called on to make repairs on the battlefield as well as in the workshop. They are a common sight on battlefields with large numbers of armoured vehicles, and are often accompanied by a retinue of servitors for assistance or protection. Although most Guardsmen revere their vehicles enough not to risk annoying an Enginseer by 'tinkering,' the modification of vehicles to fulfill a certain need is inevitable, much to the chagrin of any Enginseers present. Enginseer contingents are also included in the mighty Titan Legions and the crews of the massive warships of the Imperial Navy, allowing them to perform emergency repairs in the heat of battle.[Needs Citation]

Despite the respect they usually command among the units they are seconded to, Enginseers are not held in high regard among the Cult Mechanicus itself as their skills seldom contribute to The Quest for Knowledge. As a result of their overwhelmingly practical knowledge, they are often viewed as lowly but necessary cogs in the workings of the Cult. Enginseers make use of robotic arm augmentations known as Mechadendrites that are connected to their central nervous system via the spine. They are used to help the enginseer in repair operations, heavy lifting and for self defence.[Needs Citation] 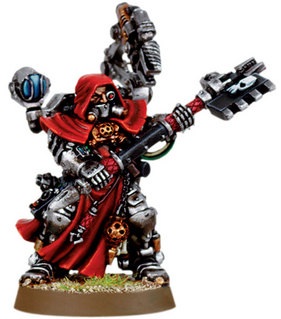