The Enoulians are a race of humanoids believed to have originated from the Halo Stars but are occasionally encountered in the Calixis Sector. 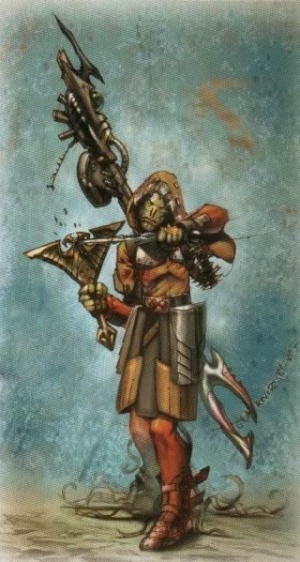 Enoulians are smaller than baseline humans, being on average 1.5m tall with a slight build. They also have yellow skin that exudes a lubricating material that allows them to slip free from any attempt to capture them.

They do not have externally developed ears or noses like other humanoid creatures such as Humans or Eldar instead having simple slits where those organs should be.

They wear simplistic clothing, which often leads humans to believe that they are a race of primitives. Yet they are a highly advanced species and use technologies unavailable to the Imperium.

Not much is known about Enoulian history, or the location of their homeworld.

The Enoulians have a deep hatred of the Imperium, bordering on the irrational. Reacting with uncontrollable rage to the icons and symbols such as the Imperial Eagle. They also do not work with Imperial organisations for any reason.

This hatred does not extend to humans as a species however, and criminal elements or chaos cultists have been able to "purchase" the loyalty of Enoulian mercenaries from time to time.

An interesting fact of Enoulian culture is that they do not seem to place the same values on precious metals or items for barter. Instead they choose their payment from seemingly worthless items such as bones, plants or junk. This has led to concern from the Ordo Xenos that the Enoulians are using these items in dark and terrible rituals.

Enoulian technology is quite advanced and different from Imperial technology; in ranged combat they utilise Shard Weaponry which use solid crystals as ammunition. Tearing minute pieces from it electrically and discharging them at speed to tear opponents apart, similar to the Splinter Weaponry used by the Dark Eldar.