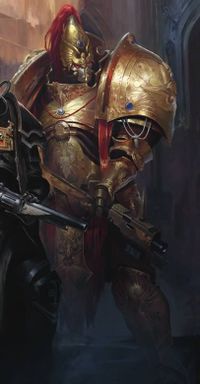 The Ephoroi are a division of the Adeptus Custodes.[1]

A shadowy order with little information on it available, the Ephoroi specialize in covert operations, counter-intelligence, assassination, and infiltration. It is thought that at the time of the Great Crusade the Officio Assassinorum fell under the purview of the Ephoroi.[1]

In addition to its standard roles the Ephoroi are also used to test the defenses of the overall Legio Custodes in simulated attacks.[1]

Between the end of the Horus Heresy and the Indomitus Crusade, the Ephoroi were among the few Custodians that ever left the Imperial Palace.[2]