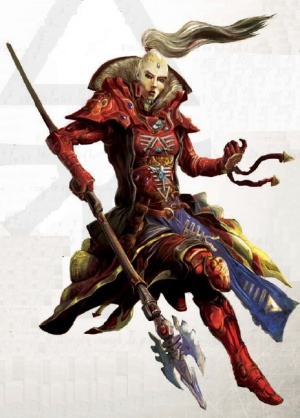 Erandel Voidsinger is an Eldar Farseer of Craftworld Kaelor and a member of the Conclave of Tears.[1]

It is said that the Eldar Farseer known as the Voidsinger is impossibly ancient, even amongst a species known to be all but immortal. Erandel has battled the enemies of the Eldar across countless thousands of worlds across the entire galaxy, from the boiling galactic core to the silent, night-haunted Halo Worlds and beyond. She is said to have witnessed sights that would blast the sanity of even the most strong-willed of her peers, and to have conversed with beings of such utterly alien consciousness that they barely comprehend the existence of even the highminded Eldar. It is said that the Voidsinger was there when the Eldar fell, and that she foresaw the rise of the Imperium of Man. Certain lines in the few Eldar mythic cycles known to human savants even suggest she has trodden the sacred ground of Holy Terra, though none who have ascertained this fact would dare propagate it, for fear of being burned upon the pyres of the Ordo Hereticus. Most of these tales are in fact true, while countless more unbelievable truths are yet untold.[1]

Throughout her impossibly long life, Erandel Voidsinger has fought alongside countless species and served in the war hosts of every one of the major Eldar craftworlds. She has watched from the bridge of corsair flagships as worlds have burned, tasted the pristine waters of untouched maiden worlds, and passed through the bone-strewn sub-realities of the Dark City of Commorragh. She has witnessed the great dance of the Harlequins more times than any other daughter of her craftworld, and shared counsel with at least one of the mysterious Solitaires. Some say she has leave to come and go at will from the Black Library at the very heart of the webway, the terrible guardian of that fell place barely stirring at her passing. Little wonder then, that Erandel Voidsinger should serve as the representative not just of Craftworld Kaelor, but of all Eldar craftworlds, on the Conclave of Tears.[1]

An impossibly wise, sagely individual who speaks only to utter the most profound of truths, Erandel Voidsinger is, unknown to all but herself, approaching the end of her service to her species. As a Farseer, and therefore a prognosticator of unmatched skill, she knows well that the multitudinous threads of her own fate are weaving together as her ultimate end approaches. As yet, Erandel has not been able to scry the exact circumstances of her death, but she has followed the brightest strands to the Jericho Reach, and knows that it must be soon. For several decades, Erandel has heard the call of the crystal glades at the heart of her craftworld, wherein stand those of her predecessors who have become one with their home, transformed, as is their fate, into statues of solidified soul energy. In following the strands of her fate to the Jericho Reach, Erandel is defying a preordained end that would see her take her place in those serene glades, choosing death over such an end[1]

Beneath her Farseer’s raiment, Erandel Voidsinger’s flesh is already transforming into crystal. Yet, the strand of fate that would lead her back to her craftworld to the crystal glades grows weaker with each passing day, while that which leads towards the Outer Reach grows stronger. That path is as yet convoluted and winding, and its ultimate destination unseen, yet Erandel follows it willingly.[1]

Erandel Voidsinger’s role within the Conclave of Tears is unclear to those few of the Dead Cabal who know of her involvement in its activities, yet knowing what they do of Farseers, it can only be to scry the future and to guide the deeds of this small band. It is upon the Voidsinger’s counsel that most of the Conclave’s missions are launched, the fates themselves realigned with each endeavor it undertakes. Though many of these missions see the agents of the Conclave deployed in battle against the lesser races, many are far more esoteric in nature. On occasion, the Farseer has seen that a specific object must be recovered, or a seemingly innocuous event prevented at all costs. In many cases the ultimate effect of each of these actions is unknown even to Erandel, yet their importance is clearly indicated by her reading of the runes.[1]

Of late, the Voidsinger has become aware of a number of factions or powers working against her in the Jericho Reach, though she has yet to fully ascertain who or what these represent. Each is exerting its own influence upon the strands of fate converging in the depths of the Outer Reach, ripping some asunder and reshaping others according to numerous and unpredictable wills. In addition to these, the proximity of the vast lesion on space and time known to humanity as the Hadex Anomaly distorts the fates of almost every mortal being beneath its baleful glare. Even as Erandel resists the transmogrification of her body into a crystal statue with nothing but the sheer force of her indomitable will, the strands grow ever more intertwined and unreadable even as they converge on some as yet unseen world within the Outer Reach.