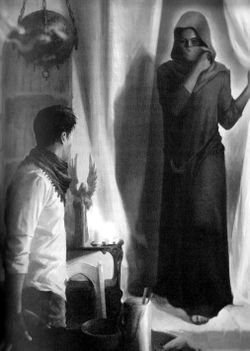 Erda is a Perpetual that is considered to be the most powerful of her kind, after the Emperor.[1]

Erda met the Emperor in Terra's ancient past, when he was a warlord king known as Neoth in the age of the First Cities. At that time, the Emperor was already shepherding Mankind into the path that would lead to the creation of the Imperium. Erda grew to adore the Emperor and she became one of the many Perpetuals that aided him in his task. In time, though, the Emperor's arrogance and the risks he took to accelerate Mankind's future caused most of the Perpetuals to leave him. A few like Erda and the Sigillite stayed by his side, but the departures drove the Emperor to begin creating loyal artificial Perpetuals to ensure his plan would succeed. This led to the beginning of the Primarchs' creation, which both Erda and Astarte aided with. As the project began Erda's skills as a geneticist greatly aided the Emperor, but he later also required her rare gene-stock for the Primarchs to be born. Combining Erda's genes with the Emperor's resulted in the birth of the Primarchs, but Erda was prevented from taking part in their lives, as the Emperor prepared them for the Great Crusade. She despaired at the bitter future the Emperor had planned for them, with the Primarchs forcing Mankind to claim the galaxy, and she tried to save her sons from him. While they were still infants, Erda caused the creation of a Warp vortex which scattered the Primarchs across the galaxy and then went into hiding for many years. While the Emperor raged at her betrayal, he never sought to retaliate against Erda, even when he knew where she was.[1]

By the time of the Siege of Terra, Erda was living in exile at Guelb, an ancient site in Mauritania close to her birthplace. Living with a group of servants and the Space Marine Leetu, she was eventually visited by John Grammaticus. Grammaticus sought Erda's help in getting into the Imperial Palace and had also arranged to rendezvous with Oll Persson at her home. Erda was shocked to hear that Oll had become involved in the affairs of the Human race again, and expressed worry over his fate when he did not arrive. Though sympathetic to John's cause she ultimately said she had no way to help him enter the Palace.[1] Consulting the stars and her tarot cards, Erda eventually came to the conclusion that Persson would arrive on Terra two weeks after Grammaticus. She wished John luck in his endeavor to find Persson and gave him the services of Leetu.[1a]