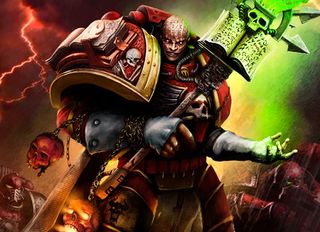 "And for all of this, I am hated. For being there at the outset, for laying the foundations that others would willingly build on. I think they wish to find something in this story that explains things - some moment of decision, some choice that could later be regretted or accounted for. But it's just as I said - none exists. I have always been on this road, never turning never deviating. A long time ago, aware of my limitations, I formulated an expression to capture my condition: blessed is the mind too small to doubt."[9]

Erebus is one of the most prominent members of the Word Bearers Chaos Space Marines and a member of the Dark Council of Sicarus. He was the harbinger of the Horus Heresy, instrumental in converting first Lorgar and then Horus to Chaos.[4a] Erebus refers to himself as the Hand of Destiny, the mortal instrument of the plans of the Ruinous Powers.[6]

Erebus as he appeared during the Great Crusade 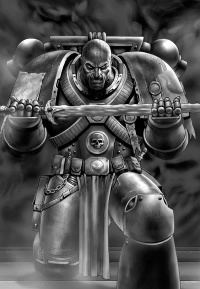 Erebus before the Heresy with the Anathame

The boy that would become Erebus was born to common parents on Colchis and even at a young age felt it was his purpose to manipulate, deceive, and sow discord. He felt a thrill testing his own limits in these acts, which in its earliest form manifested as him teasing desert scorpions. His parents often scolded him for his poor behavior and lack of achievement, comparing him to his village's pride: a religious and studious child named Erebus. Taking his parents advice to be more like Erebus to heart, the boy strangled him with a garrote and replicated Erebus' facial tattoos. Taking the identify of Erebus for himself, the boy departed his village and became a aspiring priest for the Covenant of Colchis in the city of Vharedesh. Erebus cared little for his studies at first, but gradually began to appreciate their meanings. One day he saw his face reflected into four parts within a cracked mirror, and realized that the Ruinous Powers had always been with him and guided his actions. Erebus became a devout child of Chaos thereafter, mastering the Old Faith of Colchis which in truth was just an aspect of Chaos worship. When the Covenant of Colchis fell at the hands of Lorgar and his followers Erebus went into hiding for a time before reemerging as an acolyte of the Primarch.[9]

When the Emperor arrived on Colchis Erebus was already well aware of his existence as the Anathema, and was the only one on Colchis who was not overcome by His glory. Instead, Erebus felt exhilaration at seeing the man he would soon bring low. Erebus was converted into a Space Marine of the Word Bearers shortly after and began to implement the Dark Gods plans to overthrow the Emperor's order.[9]

At the onset of the Heresy and the end of the Great Crusade, Erebus held the prestigious position of First Chaplain of the Word Bearers Legion. He was a fearsome and intimidating Astartes warrior, sections of the Book of Lorgar tattooed across his shaven scalp to terrify his enemies. Feeling abject humiliation after the Emperor's punishment for their legion's deification of him, Erebus began to tell Lorgar that were other gods in the universe that could be worshiped. Thus Erebus, aided by Kor Phaeron, were able to slowly poison Lorgar into accepting Chaos. After the pilgrimage of the Word Bearers into the Eye of Terror, Lorgar and his legion fully embraced Chaos. Erebus would play a vital role in his legion's new plans.[3] It is unknown when Erebus himself began worshiping Chaos, but it may have been through his faith in the Covenant of Colchis before joining Lorgar, which worshiped aspects of the Chaos Gods. Like Kor Phaeron, Erebus kept these secrets from his primarch.[5]

Some time before the time of first contact with the Interex, Erebus began associating with the Luna Wolves legion and with the Warmaster in particular. During negotiations with the Interex, Erebus stole an archaic anathame sword from their closely guarded Hall of Devices, precipitating the war.[1] This was not simply out of greed - it was all part of his carefully managed plan to corrupt the Warmaster and bring him under the influence of his own secret masters, the Warp powers of Chaos.[3]

Erebus gave the weapon to the traitor Governor of the planet Davin, Eugen Temba, and played Horus's pride to get him to lead his expedition fleet back to Davin and personally bring it back to compliance. Temba played his part, wounding Horus with the anathame as Erebus intended, and the Luna Wolves' apothecaries couldn't heal his wounds. Erebus suggested to the Mournival that Davin's Serpent Lodge could heal their primarch. The grief-stricken Ezekyle Abaddon and Horus Aximand turned Horus over to their care and Erebus projected himself into Horus's fever visions disguised as the late Hastur Sejanus. Opposed by Magnus the Red, Erebus won over Horus to his cause with visions of a future that deified the Emperor and a select few primarchs, rejected the rest, and had seemingly forgotten Horus's contributions compared to the offer of replacing the Emperor and possessing unimaginable power.[4b]

Erebus continued to pour honey into Horus's ear, directing him further from the Great Crusade and pursuing his own ascension. By showing the Warmaster the powers of the Warp and urging him to make pacts with the gods of Chaos, he eventually set Horus on the path to heresy against the Emperor.[Needs Citation]

Along with Horus, Erebus masterminded the Isstvan III betrayal, ever mindful of the need to eliminate those loyalist elements of the Traitor Legions before the war on Terra could begin. Garviel Loken suspected Erebus as a traitor and conspirator, which only led the corrupt Chaplain to add him to the list of doomed Astartes brethren sent down ahead of the virus bomb assault on the planet. Erebus remained with Horus throughout the Heresy, acting as his dark spiritual adviser and co-conspirator.[Needs Citation]

He later proved instrumental in the aftermath of the Battle of Calth, successfully summoning the Ruinstorm to effectively split the Imperium in two.[6] During the same battle he captured and brainwashed Tylos Rubio into becoming a sleeper agent to one day assassinate Malcador.[8] Later during the Shadow Crusade, Erebus manipulated Argel Tal to his demise after foreseeing that the Gal Vorbak master would interfere with Kharn's destiny of becoming the Blessed of Khorne. As Kharn and Tal were close comrades, Erebus was nearly killed by the World Eater after he discovered his hand in his friends death. Erebus was viciously beaten by Kharn before being forced to teleport himself from the Conqueror.[6] Erebus again suffered a humiliation after the Battle of Signus Prime, a plan he initiated despite repeated warnings that it would fail from Lorgar. There he let his arrogance slip in Horus's presence, blaming the Warmaster for disrupting his plans for the Blood Angels and Sanguinius. Horus punished him for his insolence by flaying Erebus's heavily-tattooed face from his skull with his own athame.[5]

Erebus, his face regenerating slowly but now horribly mutated, later reappeared to dispatch a force of Word Bearers under Valdrekk Elias and Barthusa Narek in order to acquire the Fulgurite.[7a] After Elias attempted to betray Erebus, he reappeared in person on Traoris to kill his apprentice, give John Grammaticus the Fulgurite, and allowed him to leave with it. Erebus by this point had been banished by both Horus and Lorgar, but still viewed himself as the shadow king of the Heresy who was closest to the Dark Gods.[7b]

During the later Heresy and Siege of Terra Erebus assumed a variety of disguised and infiltrated both sides in order to fulfill his agenda. One of his most notable disguised was the Word Bearers Apostle of the Unspeaking, who proved key in the ritual to open the way for the traitor armada to emerge on Terra during the last stages of the Solar War.[12a][13] He eventually appeared before Erda in her small home in Mauritania and offered her the chance to join the Forces of Chaos. When Erda refused, Erebus summoned all four types of Greater Daemons.[12a] In the furious battle that followed, Erda was able to slay all four of the monsters but was badly weakened in the process. Erebus again offered Erda the chance to join Chaos and demanded she "worship" him. Erda spat in his face, which caused a disappointed Erebus to stab her with his Anathame blade.[12b] After the battle Erebus sensed that Erda had aided John Grammaticus and Oll Persson's group and sought them out.[12c]

After the defeat of Horus at the Battle of Terra, Erebus fled into the Eye of Terror with the rest of his Legion. He is currently a member of the Dark Council, the ruling body of Sicarus and is often engaging in power struggles for control of the Legion with Kor Phaeron.[2] He lead an invasion into the Pyrus Reach Sector.[10] During the 13th Black Crusade of Abaddon the Despoiler, Erebus would appear leading an army of Word Bearers across the Cadian Sector, sacrificing millions of human captives to summon a vast army of Daemons across the Sector.[2]

In Greek mythology, Erebus is the son of the primordial god Chaos.