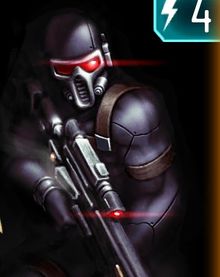 Eristede Kell as an Imperial Assassin[4]

Eristede Kell was a top-rated Vindicare Assassin at the time of the Horus Heresy. He was part of a top-secret mission to assassinate the traitor Horus with four other assassins on the planet Dagonet.[1c] However, the plan ultimately failed, and Kell was captured and turned by Horus.[3a] He was then sent to Terra to assassinate Euphrati Keeler, known as the Saint, to cause disruption before the final strike.[3c]

Growing up in the slums of the Hive World of Thaxted Duchy Kell and his sister Jenniker Solam were the last surviving members of the Kell Dynasty. The rest of their family had been assassinated by rival aristocrats in the continuous inter-dynastic wars of the planet. Orphaned and alone, both were taken in by the Schola Progenium and made members of the Officio Assassinorum. Driven by a desire to avenge his parents, the Officio gave Kell permission to massacre the man who had ordered his parents' deaths. Kell did so, but killed many innocent bystanders in the process.[1a]

Later, Kell was given command of a top-secret Officio mission to assassinate the traitor Primarch Horus. Kell carried out the mission alongside the Culexus Iota, the Eversor known as The Garantine, a Callidus assassin known as Koyne, the Vanus assassin Fon Tariel, and his sister and now Venenum Assassin Solam in the Officio Assassinorum's first Execution Force. The assassins traveled to the planet Dagonet, which was in the midst of a civil war between loyalist and traitor elements.[1b] Despite this, the assassination attempt against Horus failed when one of the Warmaster's subordinates, Luc Sedirae, acted as a body double and was killed instead.[1c]

With his mission crumbling from reprisals by the Sons of Horus, Kell at the last minute decided to pursue the daemonic assassin known as Spear at the behest of his sister, as opposed to continuing on with the mission to kill Horus. After a vicious struggle, Kell managed to kill Spear, but was the only survivor of the team. He then journeyed in the Ultio to make a suicidal attack on Horus' flagship, the Vengeful Spirit. Kell supposedly died ejecting himself into space in front of the Vengeful Spirits command bridge, attempting to land a shot on the silhouette of Horus that stood in its window.[1d]

Kell missed his shot, but somehow managed to board the Vengeful Spirit and spent years hidden to try to get another shot. Due to the isolation while hiding, he began to lose his mind.[2]

Eventually, Kell was discovered aboard the Vengeful Spirit and turned by Horus himself. Later, Kell was transported to Terra on a mission to assassinate Euphrati Keeler by order of Horus, and he was joined by the Alpha Legion operative known as Haln.[3a] While there, he tracked Keeler to a remote location called Salvaguardia and slaughtered the pilgrims and followers of the Lectitio Divinitatus with his warp based gun as Haln used a knife to torture survivors for information.[3b] Leaving, Haln took Kell to his secret safe house on the Walking City, a large mobile platform, as he sought more information. Eventually, an informant provided him with information that Keeler was on the Hesperides orbital plate and that Nathaniel Garro of the Knights Errant was also tracking her.[3c]

Haln and Kell make their way to the orbital plate, running across a survivor of a skirmish with Garro. Using trickery, Kell befriended the survivor in order to get the information they needed before killing him and his men.[3d] Haln and Kell then created a plan to slip into Keeler's flock of worshippers by freeing some that were captured and having Haln blend in with them. Finding the group, Haln infiltrated as a pilgrim while Kell took a sniper's position. Haln broke from the plan and attempted to stab Keeler, but he only managed to stab Zeun Thuruq before being cut in half by Garro throwing his great sword Libertas. Kell fired on the other pilgrims in the area, slaughtering many before Garro joined him in battle. Garro managed to cut his warp-cursed gun hand and then destroy the demon as it writhed on the ground. Before killing Kell, Garro asked why he turned, and Kell explained that Horus allowed him to see that they were all traitors, betrayers and betrayed.[3e]