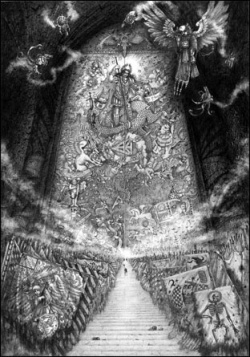 The Eternity Gate is the Imperial Palace's final gateway to the Sanctum Imperialis which holds the Golden Throne and the Emperor himself.[Needs Citation]

Two Warhound Titans of the honored Legio Ignatum stand guard, an eternal vigil they share with the 10,000 guards of the Adeptus Custodes. [1]

Along the grand hallway to the Gate, scores of banners line the way, carried in battle by the Empire's greatest heroes from its very founding, among them one carried by Lord Commander Solar Macharius. Just as they honour the Emperor, he returns such honour. [1] At the end of this hallway of heroes the gate itself stands, massive and unbreakable, forged of tempered adamantium layered with ceramite. Its outer face is sheathed in gold, and masked with an image of the Emperor in the days of the Great Crusade standing triumphant over his broken enemies.[Needs Citation]

During the Battle of Terra in the Horus Heresy, Primarch Sanguinius led the defense of this entrance from the hordes of Chaos vying to overrun the Palace when no other could withstand the ferocity of the assault. Later during the War of the Beast, an Eldar raid got within sight of the Eternity Gate before it was defeated by Custodes.[2] A Chaos uprising known as the Siege of the Eternity Gate took place sometime later.[Needs Citation]