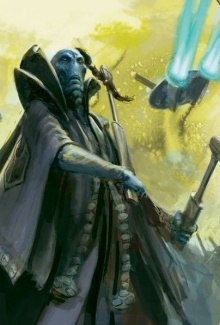 The Ethereals (or Aun in Tau) are the leaders of Tau society.

Their arrival started the unification process between the various Tau tribes and coincided with the implementation of the concept of the Greater Good. They first appeared during a siege between the Tau of the plains (later known as the Fire Caste) and the Tau of the city of Fio'taun (later known as the Earth Caste). The Ethereals brought the two sides together to negotiate and convinced them to follow the Greater Good. Their power over the Tau is such that an Ethereal could tell a Tau to die and that Tau would do so quickly and gladly. The Adeptus Mechanicus would give much to learn the secret of the Ethereal's power. There is strong implication from the similarities between an organ possessed uniquely among Tau by the Ethereals, and an organ which Q'orl use in pheromonal communication that this ability may be due to deliberate engineering in the Ethereals' past.[1]

Ethereals sometimes lead the Fire Caste into battle to provide inspirational leadership, so the warriors can achieve more. However, if the Ethereal falls in combat, the remaining Tau are struck with grief that causes them to lose battles or they get extremely enraged and charge forward. Either way, after an Ethereal falls the Fire Warriors lose all discipline and efficiency.[4]

Though the obedience of the Tau to Ethereals is natural, the other races, especially Mankind, have long speculated about the features of this uncommon loyalty. There are a lot of theories from the prenatal indoctrination or pheromonal compulsion to the presence of some veiled psychic gift possessed by the Ethereals, but as yet no confirmed proof of any such power has been secured. Those few Ethereals that have been captured and subjected to interrogation have proven less than forthcoming.[8]

On their foreheads resides a small organ, smaller than the ones the other castes have. Imperial studies on the organ show no biological function, but it's suspected that the ethereal studied is a dud, or that the way the Ethereal control the Tau is more esoteric in nature[4]

As the leaders of the Tau, the Ethereals are enigmatic and studious, yet unfaltering in their authority and their drive to further the Greater Good. They are mystics and philosophers, possessed of knowledge and wisdom not shared by their more practical subjects. As such they had some part to play in the Tau rapid development, and to this day guide their species in its dynamic expansion, or the castes revert to the savagery that once threatened to destroy them.[4]

Ethereal ranks from lowest to highest are[11]