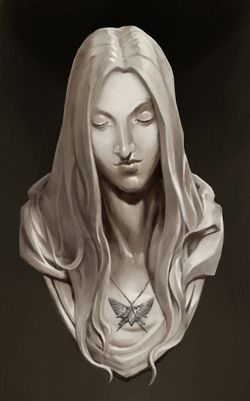 Euphrati Keeler was a remembrancer attached to the 63rd Expeditionary Force in the closing months of the Great Crusade.[1a] As a result of later events, she would later be canonized as one of the first Saints of the Imperial Cult.

An imagist of some renown, while attached to the 63rd Expeditionary Force under the command of Warmaster Horus[1a], her images included the rescue of Maloghurst from the surface of Sixty-Three-Nineteen[1b], and Garviel Loken taking his oath of moment before the Battle of the Whisperhead Mountains.[1c]

She and other remembrancers were allowed to travel to the surface of Sixty-Three-Nineteen during the Battle, though they were meant to be kept well away from the actual fighting.[1d] On an impulse, their group slipped away from their Imperial Army escort and entered the rebel stronghold in the mountains.[1e] She was shaken by an encounter with the daemon Samus in the Whisperheads, which killed the entire group except for herself and Kyril Sindermann.[1f] This experience may have contributed to her eventual joining of the Lectitio Divinitatus, a cult that worshipped the Emperor of Mankind as a deity.[1g]

Her devotion to the Emperor became clear when Kyril Sindermann accidentally summoned a demon using the Book of Lorgar in the library of Warmaster Horus' flagship, the Vengeful Spirit, as she stood before the beast and banished it back into the Warp. She went into a state of what could be described as catatonia. The word went out throughout the 63rd Expedition, leading the Divinitatus members to see her as "the Saint", the venerated prophet of the Emperor. She became the target of Horus' assassins, including Maloghurst's enforcer Maggard. She awakened shortly before the battle of Isstvan III, and warned that something was afoot. She witnessed the bombardment of Istvaan, and approached Iacton Qruze to escape the Vengeful Spirit. She escaped from Istvaan onboard the frigate Eisenstein, commanded by Captain Nathaniel Garro, a Death Guard loyalist.[Needs Citation]

The Silent Sisterhood believed that Keeler may in fact have been a renegade psyker. She was taken to their fortress monastery on Luna and questioned.[Needs Citation]

As the Horus Heresy progresses, Horus commands turned assassin Eristede Kell to hunt down Keeler and kill her, thus causing mass disruption on Terra. Keeler at the time was spreading the Lectitio Divinitatus across the planet, and an assassination would cause mass religious fervor upon her death. At the same time, Garro was searching for her, needing answers after he became one of Malcador's Knight-Errant, and he was able to intervene with the assassination plot by the mad assassin Eristede Kell and save her. Eventually, she was taken into Malcador's custody. During the battle, Keeler demonstrated the ability to share visions of the future, heal wounds, and stop time to communicate with others.[4] Garro stated that he would set her free when the time came.[Needs Citation]

Keeler was visited by Garro several times in a prison under the Imperial Palace along with Sindermann, who somehow was able to regularly infiltrate the complex. Shortly before the founding of the Grey Knights by Malcador, Garro visited Keeler again.[5]

During the Siege of Terra, Keeler, Kyril Sindermann, and her other followers took refuge inside the Inner Palace and aided with the throngs of refugees. They had been granted an immunity of sorts by Malcador, who wished to see if they could be used to counter the immaterial powers of Chaos through faith in the Emperor.[7b] However her cult was subverted by Cor'bax Utterblight, who manifested inside the Palace through her followers own faith. Keeler was initially distraught from this, but realized the dangers of blind faith and understood that others faith such as those by Sindermann had saved her from the Daemons influence. With a new understanding, she helped Amon Tauromachian and Malcador in the defeat of Utterblight by psychically confronting it in the Immaterium. Afterwards, Amon was assigned to watch over Keeler and her Cult.[7a]

Keeler was held in a Blackstone prison under the Tower of Hegemon, supervised by Amon. However she was recruited into Kyril Sindermann's new order of Remembrancer. Due to the fact that Keeler will not renounce her faith, she is forbidden from leaving the prison and thus can only interview her fellow inmates. One of these is the mad scientist Basilio Fo, during which she learns of his theorized contagion that could kill both Space Marines and Primarchs.[8a] After agreeing with Amon that this knowledge should be shared with Dorn even though it is dangerous, Keeler and Amon interview Fo a second time with the intent to record everything regarding the transhuman virus.[8b]

During one of these interviews with Fo, Keeler and Sinderman were interrupted by Hellick Mauer and Andromeda-17 who wished to seek their aid in investigating waves of despair and madness spreading across the loyalist ranks. Keeler agreed to leave the prison to help Mauer, but would have to lie and renounce her faith in order to do this.[9a] However while in Mauer's armed convoy the group was ambushed by enemy forces. Keeler escaped during the attack, but became separated from the others.[9b] Fleeing into the ruins of Terra, Keeler resumed her role as cult leader and organized fanatical proto-Frateris Militia. Fighting a doomed and desperate struggle against the advancing traitors, she nonetheless was revered by her followers and sought to make the traitors pay whenever they could.[10a] She was eventually confronted by Garviel Loken, who let her continue her work.[10b]

At some point before the start of the Heresy, Euphrati Keeler took several photographs of a comet above the planet El'Phanor. The comet was later named the Keeler Comet. is important to note that the comet was named after Saint Euphrati Keeler, the Prophet of the Emperor.[2]

Likewise, Euphrate's Warp is the name of a stellar phenomenon in the Sabbat Worlds Cluster, in Segmentum Pacificus.[3]