"Fear me, for I am your apocalypse."
- Dictatus Eversor[8]

Symbol of the Eversor Temple[0] 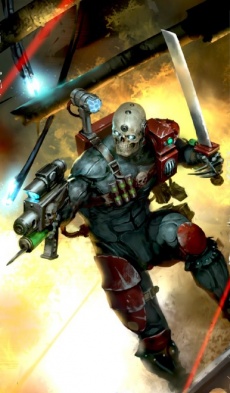 The Eversor Temple is one of the temples that makes up the Officio Assassinorum. Where other Temples produce assassins who specialize in stealth and subtlety, Eversor assassins are berserk killing machines, trained to wipe out entire command hierarchies or heretic families, in spectacular fashion. The Eversor Temple itself is located in one of the magnetic poles of Terra.[7]

Eversor Assassins are the most gruesome products of the Officio Assassinorum. They are drug crazed killing monsters, enhanced by bio-engineering and experimental surgical procedures. Their state of mind is amplified to turn a mere dislike for the enemy into raging hatred, or the wish to serve the Imperium into suicidal determination. Their main objective on the battlefield is to rip out the heart of an enemy operation in the most unsubtle way. By slaughtering all enemies in the vicinity they ensure the command structure is entirely destroyed.[1a]

These psychotic assassins are trained to be utterly ruthless and completely dedicated to the Imperium. In addition, specialized use of genetics and human biology result in the Eversors' modification to be more efficient killers making them almost superhuman. Their bodies are modified to make them superb killing machines and include augmentations that strain the limits of their human physiology through the use of bionics and genetic alterations; the assassin is implanted with adrenal ducts, which speed up the brain's higher functions, allowing the Eversor to make complex calculations and tactical decisions in seconds. The adrenal ducts are also able to feed the brain, allowing the assassin to work briefly in a hard vacuum. In addition, a secondary heart is implanted in order to help the assassin's body cope with the various changes and to act as a fail-safe in case the primary heart is damaged in combat.[1a] 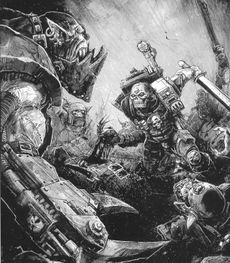 The Eversor Temple also makes use of a number of combat drugs that make the assassin psychotically insane and push his bio-engineered body to the limit in order to better his performance on the battlefield. As such, these assassins possess a hyperactive immune system to counteract the toxins in the drugs they use. However, should an Eversor's brain or hearts cease to function, his advanced immune system will no longer be able to keep them in check. The chemical concoctions inside him will rapidly accelerate, causing him to violently explode. Eversor assassins, being well-aware of this fact, often use it as a last-ditch effort to eliminate their target(s).[1a]

The large amount of drugs and modification used to make the Eversor into an unstoppable killing machine are highly addictive and without them the assassin will surely die. This means that the assassins are completely addicted to death itself and the only way they can survive is by being placed in cryo-suspension, which sustains their bodies until called upon for the next assignment. As such, every Eversor is stored within cryo-crypts on secret ships scattered across the Imperium. These vessels remain at a constant state of alert and await the orders from the High Lords of Terra to be deployed to the battlefield.[1a]

When chosen for a mission, the Eversor is transferred from the cryo-crypt into a special drop pod. Once inside, neuro-links feed the details of the mission to the assassin while he remains in cryo-suspension. The pod is then launched at the target planet where remote links activate and begin to reanimate the Eversor while fine tuning his body for the task at hand. By the time the drop pod lands on the planet, the assassin is fully awake and ready to begin his task.[1a]

Due to the nature of cryo-suspension, the life of the Eversor is prolonged. The assassin in question may be completely unaware of how much time has passed while in cryo-suspension, which can be years or even centuries. To the assassin, it is as if only moments have passed between the last mission and the current one. They are completely focused at the task at hand and are ready to satiate their bloodthirst by destroying the enemies of the Imperium. This surprise attack by an Eversor catches the enemy completely by surprise as they remain confused by the nature of the attack. Quite often, before they realise what is happening, it is far too late.[1a]

Even should the Eversor be killed, all the foe around him may be also destroyed due to so called bio-meltdown process, for the assassin’s biochemistry explodes with the force of a plasma bomb.[13]

The Clade is known to have used the Aktick region on Terra for a deep cold iso-store located beneath the mantle of ice. In this region, cryopods contained Eversor assassins in their domant state who were kept frozen by way of conduits that held super-chilled methalon whilst they remained in a semi-dormant unarmed state. Technologians of the Clade tended to such a facility that housed at least ten Eversor field operatives in the iso-stores.[6]

The Eversor Temple is considered perhaps the most gruesome of Temples of the Officio Assassinorum as their assassins specialise in shock and terror tactics. Their missions often involve them instilling fear of Imperial retribution into the hearts and minds of those who hold positions of power. When working for the Ordo Malleus, these assassins are only used when the taint of Chaos is believed to have spread through the ruling elite of an entire organisation. On such occasions, an Eversor assassin is deployed behind enemy lines in order to eliminate the taint at its heart whilst the more overt forces of the Ordo Malleus engage the daemonic minions of Chaos on the battlefield. These assassins rarely have a single target in such engagements as they are instead charged with wreaking havoc and destruction in their foe's midst with the intention of ripping out the heart of the Chaotic insurgency. The brutality serves the purpose of bringing about the complete cleansing of the renegades involved and to ensure that no successors take up their mantle. When deployed, an Eversor assassin's unstoppable attack works to utterly destroy their foes.[2]

When under the employment of the Ordo Hereticus, Eversor Assassins are deployed when the ruling elite of an entire organisation are believed to be guilty of heresy. Similar to their use by the Ordo Malleus, Eversors are used to eliminate the source of heretical corruption in any rebellion. The havoc and destruction that they accomplish behind enemy lines allows them to completely eradicate the presence of any renegades to forever purge any trace of heresy.[3] 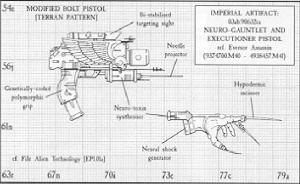 The weapons of an Eversor assassin[Needs Citation]

An Eversor Assassin is armed with an Executioner Pistol, Power Weapon and Neuro Gauntlet. The Executioner Pistol combines a Bolt Pistol with a Needle Pistol. The Eversor is also equipped with melta bombs to destroy tanks and heavy doors and a Sentinel Array for receiving targeting information.[1b] Eversor uses a concoction of combat drugs (frenzon,[13] Fury, Terminus, Destroyer )[1b] that alters his state of mind to that of a psychopath, and pushes his bio-enhanced body to its absolute limit.[13] Each Eversor Assassin develops hyper-immuno systems to counter the toxins in the many combat drugs. However, a large number of the drugs are also highly addictive. The result of this is that drugs must constantly fill the Assassin's system. The only way Eversor Assassins can be kept under control is to keep them in stasis until they are required for a mission.[1b]

The origins of the Eversor Clade trace back to the age of the Great Crusade where the first Master of Assassins formed the Officio Assassinorum alongside six individuals who had formed the pact at Mount Vengeance in order to eliminate the Emperor's enemies from the shadows. These six individuals became the founders of the Clades and the Director Primus of their operations where they eliminated their foes for decades. Sire Eversor became the founder and first Director Primus of the Eversor Clade that was well known for its brutality. At the outbreak of the Horus Heresy, the Master of Assassins ordered an Officio Assassinorum Execution Force to be first assembled with the intention of eliminating the renegade Warmaster Horus.[6] Among those assembled was The Garantine, an Eversor Assassin who had been accidently awakened at his Clade's facility in the Aktick on Terra.[6]

In 546.M32, the Grand Master of Assassins Drakan Vangorich began a period of anarchy when he assassinated all the members of the High Lords of Terra during the events of The Beheading whereupon he fled into hiding at an Assassinorum temple. A century later this drew the wrath of the Adeptus Astartes who sent a retribution force consisting of the Halo Brethren, Imperial Fists and Sable Swords. Upon landing, the strike force's commander was assassinated, and the Space Marines fought a battle against a hundred assembled Eversor assassins. They eliminated all the Astartes except for a single warrior Maximus Thane who managed to break into the traitor's hideout and terminate Vangorich in the name of the Emperor.[5]

During the Taros campaign, Imperial forces under the command of Van Horcic decided to enlist the aid of the Officio Assassinorum after the discovery of the Tau headquarters on the planet. After agreeing with the plan, Colonel Scheja used top secret codes sent via a priority astro-telepathic message which requested an assassin agent to be deployed. The honour of this mission was given to a servant of the Eversor Temple who was not expected to survive but eliminate the Tau leadership on Taros as part of Operation Deathblow. At 684998.M41, the transport ship Son of Jucha successfully evaded the Tau blockade in order to deliver the special bio-stasis container holding the Eversor assassin to the Righteous Blow. Following the assassin's programming and being equipped for the assignment, a drop pod was used to deliver the Eversor to the surface of Taros. Journeying through the desert, the Eversor eliminated various Tau patrols and the Fire Warriors at the command centre in order to eliminate the Ethereal Aun'Vre. Before the assassin could complete his objective, more bodyguards emerged who critically wounded the Eversor, but not before he managed to get near the Ethereal and detonate, thus killing the Tau leader and destroying the command centre.[4]

A large number of Eversors took part in the Indomitus Crusade, where they were used to sow terror ahead of the advance of conventional troops.[12]

Eversor is Latin for "a destroyer".