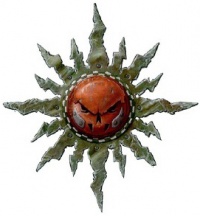 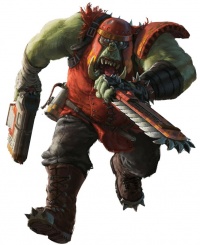 The Evil Sunz are one of the six major Ork Clans, their most notable characteristic is their love of fast vehicles (or "jalopies").[1]

The Evil Sunz love loud, rumbling engines, the smell of gasoline, and above all, going as fast as Orkily possible - arguably even more than splitting heads (of course, going as fast as Orkily possible while splitting heads is a dream fulfilled). Usually, an Evil Sunz band will consist almost entirely of Speed Kult members. Even warbands that haven't given completely over to their love of speed will often have many bikes or vehicles in their force. The clan also contains more Mekboyz than most, and therefore they often field more mechanical creations than other clanz. What little footsloggers they do have are saving up their teeth for a good bike, or perhaps a group of Ork mates are pooling in for a flash truck.[Needs Citation]

Their symbol is a red sun with a grimacing face, often with yellow or orange flames.[Needs Citation]

Most vehicles of the Evil Sunz are painted red with flames down the side to tie in with their main belief that "Da red wunz go fasta!" Often, the Evil Sunz are envied by the slogging footboyz of other klanz for their ability to get into the battle quickly, especially the highly mobile Trukkers, who charge into the fray aboard a large and shoddy Wartrukk that is poorly armoured but blindingly fast, as well as having big shootas. Warbikers in this klan are the best of all the other Orky bikers, often refitting their hull-mounted dakkagunz with menacing mega-blastaz. Their horridly crude engines deliver a sickening plume of smoke wherever they travel, granting them cover.[Needs Citation]