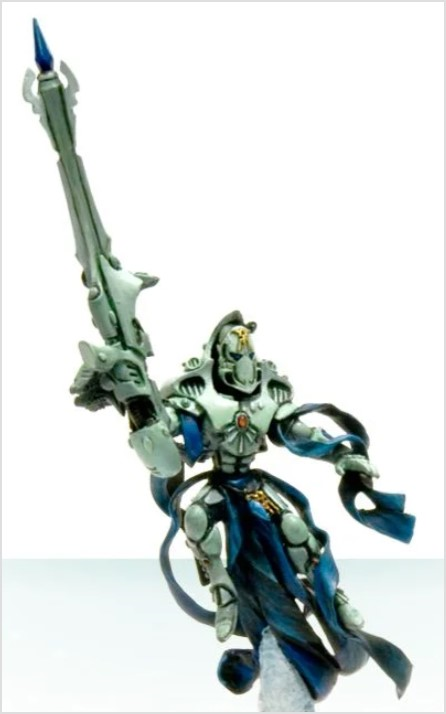 These fighting suits are of a superior version worn by ordinary members of the Warrior Aspect and their great age means they preserve much ancient workmanship, long-abandoned decorative styles as well as various emblems and ornamentation that mean nothing to typical Eldar.

From their shrine, they take the spirit stone that houses the departed souls of past Exarchs whereupon they assumed a Sacred Name that is associated with the stone. This comes at a time when their spirit mingles with that of the spirit stone which has been part of the armour since its inception. The mind of its user becomes lost within the greater heroic beings that bear the Exarch's name with their memories as well as experiences of the past beginning to merge with their own. Thus, their life becomes just another stage in the long existence of the spirit stone as the heroic warrior is born once again in a new form.

As such, when a new Exarch wears their armour, their experiences and accumulated memories merge with that of the one present in the spirit stone. These combined experiences allow the user to understand the ancient weaponry and armour that they are using as well as give them general knowledge of ancient times when the original wearer lived. In this manner, the Eldar that wears the armour of an Exarch is initiated into the most closely guarded secrets of his kind, namely the origin of the Exarchs during the time of the Fall itself.[1][2]