The Executioners are a Space Marine Chapter of Imperial Fists descent[1]. They sided with the rebel forces during the Badab War, but were granted the Emperor's forgiveness at the conclusion of that conflict[2h].

The Executioners are a Chapter that trace their origins to the tumultuous years following the Horus Heresy. They are descendants of the Imperial Fists, and were said to have been founded and led by Fafnir Rann, said to have been one of the most vicious of Rogal Dorn's captains. According to the Chapter's own chronicles, they were founded for the express purpose of seeking out and slaughtering the foes of Mankind. Their brutality was displayed in the Invasion of Nova Sulis during the Plague of Unbelief. They ceaselessly pursued this duty for many millennia, until the events of the Badab War[2e].

During the War of the Beast, the Executioners were placed in charge of the defenses of Terra alongside the Crimson Fists as the rest of its forces under Lord Commander of the Imperium Koorland led an invasion of Ullanor.[9]

In the closing years of the 39th Millennium, the twin homeworlds of the Chapter were laid under siege by a dangerous xenoform it never encountered before. Soon, even the hallowed vaults of their fortress-monastery had been penetrated, and while the Marines of the Executioners fought back grimly against the invaders, soon there were few left to mount a proper defense of the fortress' inner sanctum. Extinction seemed inevitable, until the forces of the Astral Claws, supported by the ships of Battlefleet Tempestus, arrived to break the siege. The xenos were driven off, but at the cost of countless Astral Claws. The surviving Executioners, grateful for the aid given them, swore to assist the Astral Claws in the same manner if the Chapter was threatened in the same way.[2a]

The debt to the Astral Claws would be repaid in the Badab War, when the Executioners sided with Lufgt Huron's rebels. While nominally allied with the forces of the Tyrant, it became immediately apparent that the Executioners fought on their own terms, and apparently looked at their allies with contempt. The Chapter refused to garrison troops, claim territory, or attack non-military targets. Despite this, its forces soon gained a fearsome reputation, especially among the Howling Griffons[2f], to whom they dealt catastrophic damage at Khymara's lunar outposts in 907.M41[5], and the supply convoys of the Loyalist forces, whom they mercilessly hounded with their warship Night Hag.[2f]

The alliance would last until 911.M41, when forces under Astral Claws Arch-Centurion Commodus attacked the Salamanders battle-barge Pyre of Glory, intent on pillaging its gene-seed stores and armory, despite the fact that it had peacefully surrendered to the Executioners. Incensed at this breach of honor, the Executioners turned on the Astral Claws, not stopping until all the oath-breakers were dead. This furious battle was named Red Hour for the vast amounts of blood that had been shed. From that point on, the Chapter would become a rogue element in the war, attacking both Loyalist and Secessionist forces alike, although supply convoys were surprisingly left alone.[2g]

The Executioner's role in the Badab War came to an end late into 912.M41. Through the intercession of Captain Pellas Mir'san of the Salamanders, who felt that he owed the Executioners a debt of gratitude for their intervention during the attack on the Pyre of Glory, the Chapter was allowed to peacefully exit the hostilities, despite some misgivings from the Loyalists. The entirety of the Executioners force, led by Chaplain Thulsa Kane, was escorted back to the Salamanders homeworld of Nocturne, where they would remain until the end of the war.[2h]

Although they had suffered relatively the least amongst the Chapters that had sided with the Tyrant of Badab, the Executioners were still required to undergo a hundred-year penitent crusade to atone for its actions. They were given a measure of clemency however, and their twin homeworlds were held in trust by the Salamanders and the Executioners' own successors, to be returned to them if they returned from their quest for contrition[2b].

In the first decade of their penitent Crusade, a dozen cults are purged from the Telamon Cloud and three minor xenos species infesting the Garya Rifts are exterminated. The most glorious of many action fought during the opening years of the Crusade is against a previously unknown empire deep within the Galactic Core. Under the control of Chaos, it controlled at least three Traitor Legion warbands and one Traitor Titan Legion. The Executioners earn countless honours far from the gaze of the Imperium.[7]

In 999.M41 over eighty years into their century-long penitent crusade, the Executioners arrived at the war torn Orpheus Sector. There they discovered a slew of planets decimated by war, and swear revenge for the fallen brothers of other Chapters.[8b] 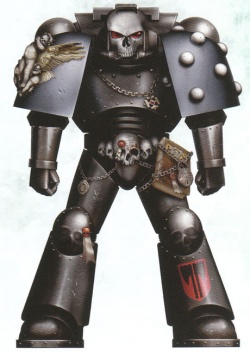 Klarkash — "Death Speaker" Chaplain of the 3rd Company of the Executioners, Confessor and Sub-Commander of the Night Hag[2j]

For a Chapter with such a savage reputation, it would surprise many to learn that the Executioners adhere very strictly to the tenets laid down in the Codex Astartes, with only a few variations. The most notable of this is the replacement of the standard Devastator Squad in a Battle Company with a squad of Veterans equipped in the Sternguard configuration[2c].

Another change is that each Company is assigned three Chaplains instead of one. These individuals, called the Death Speakers serve the dual role of recounting the tallies of the honored dead (diligently recording both victories and defeats of the Marines), as well as keeping order in the Chapter. Death Speakers reports to the High Chaplain, or Lord Speaker of the Dead.[2e]

The Executioners seem to disdain the use of bikes and attack bikes, and instead rely on Land Speeders for scouting duties.[2c]

Each Captain of the Chapter is allowed a degree of autonomy, and considered a warlord in their own right. Although the Chapter Master, called the High Executioner, holds the ultimate authority in matters regarding the Chapter's practices, but if he should be found unfit or unworthy by popular assent, then any Captain has the right to challenge the incumbent for the position. Such contests are almost always bloody[2d].

Noted Elements of the Executioners