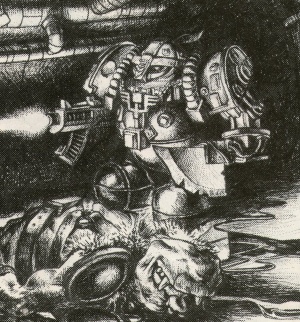 Exo-armour is a type of heavy armour, comparable to Terminator Armour, used by the Squats. It is built by the Squat Engineers Guild.

Exo-armour is a form of powered armour. The extensive protection it provides is especially useful when fighting in confined spaces where movement is restricted and it is difficult to avoid concentrated enemy fire. Exo-armour is thus greatly valued by Squats, who often find themselves in combat in subterranean tunnels.

Exo-armour also serves as an all-enclosing hostile environment suit. The development of Exo-armour was spurred by the inhospitable nature common to the Squat homeworlds.

Exo-armour incorporates an integrated power axe and boltgun. Squat armourers are adept at forging magnificent exo armour, embellished with the visage of a Squat Ancestor Spirit. The armour is handed down from father to son and is probably the proudest symbols of status of the Squat military aristocracy.

The standard weapons fitted into suits of exo-armour are often upgraded to heavy or combi-weapons by wealthy Squat warriors.