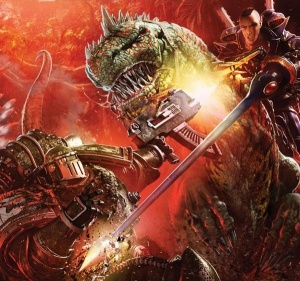 A Space Marine of the Salamanders battles an Exodite Megadon rider.[1]

The Exodites are the Eldar who abandoned their homeworlds before the Fall, colonizing other planets in order to escape the growing decadence of their civilization. 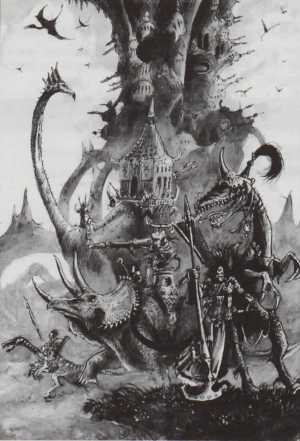 As Eldar civilization neared its Fall, many groups among the Eldar denounced their decadent societies, abandoning their homeworlds in a series of migrations called the Exodus. These Exodites travelled far away from their collapsing civilization, settling many, often harsh, worlds.[Needs Citation]

The degeneration of Eldar society leading to the Fall did not go wholly without resistance. Some, the more far-sighted, began to openly criticise the laxity of their fellow citizens, and to warn against the effect of Chaos cults. These people were mostly ignored or else treated as narrow-minded fools and fanatics. Soon the general collapse of society convinced even the most resolute amongst them that the only end to the steady decline would be in a terrible collapse. Some decided to leave the Eldar worlds, and settle new planets far from Eldar civilization. They were the ones still untainted by the touch of Chaos, and by now they were few. These Eldar are known as the Exodites.[Needs Citation]

The Exodites purposefully settled worlds where life would be hard. Those among the original Exodites came from all levels of Eldar society, but all were united in their powerful determination to survive. Eventually a new form of society took shape. The Exodites divided into clans each led by a warrior elite. When the Fall came, the Exodite worlds were untouched. Today Exodite Worlds exist in a seemingly pre-industrial rustic state. Many Outcasts will find a refuge among these Eldar, who are generally more accepting.[Needs Citation]

To others, they are the groundwork of a new Eldar Empire on the edge of the galaxy, composed of the descendants of those far-sighted and strong-willed enough to escape the touch of Slaanesh. Biel-tan is one of the chief proponents of the Exodite potential, and will often mobilise its forces in defence of one of the scattered worlds.[Needs Citation]

Though Exodite societies vary across the galaxy, virtually all possess a societal organization built around small, sovereign clannish communities. The causes, however, are unknown. It is a common belief amongst Imperial scholars that such tribalism is the natural state of the Eldar. The lives Exodites live is thought to be similar to the ancient Eldar empire before the Fall and birth of Slaanesh. Each Exodite tribe on a planet swears loyalty to a local ruling tribe that in turn owes adherence to the planet's king and his royal kinfolk. These tribal societies developed out of necessity as small, scattered communities that were the most effective way to exploit the sparse natural resources of the newly settled worlds.[2b]

As there are comparatively few Eldar on these worlds there is also little territorial quarrel. Full conflicts between tribes are rare but clashes between rival Dragon Knights are common. These raids and occasional deaths do not embitter the tribes, and it is notable that no matter how hard-fought their disputes might be, no Eldar would despoil or steal the crops of a rival tribe even though these lie unprotected for months at a time. While not willingly hostile, the Exodites are a stout, self-confident people and still possess the mythical pride, even arrogance, of the ancient Eldar race.[2c]

Exodites are generally welcoming to other Eldar peoples. They have good relations with most Craftworld Eldar, particularly Alaitoc and are often visited and aided by Harlequin hosts[3]. Not all Exodites remain with their tribes however and can join other Eldar groups.

The Exodite Worlds are generally considered backward and rustic compared to the rest of the space-roaming Eldar, although they still possess a good deal of high technology. One of the pieces of technology they have maintained is the Infinity Circuit, although on the Exodite worlds these are known as World Spirits and exist in the form of stone menhirs, obelisks, and stone circles all crafted from psychoactive crystal. These are gathered together in a World Shrine.[4] Despite the presence of some technology, these worlds are often agricultural, however, and it is not uncommon for groups of Exodites to exist in a nomadic state, living off roaming herds and seasonal harvests. This is the most common image of the Exodite life.[2a]

Though often looking to their Craftworld brethren for protection, Exodites are nonetheless capable of defending themselves in a war. Their forces include:[2a]