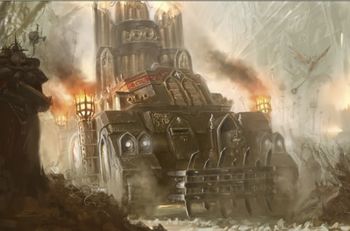 The Exorcist missile tank fulfills the role of long-range fire support for the Sisters of Battle.

Besides the Rhino, Exorcists is the oldest vehicle in service to the Adepta Sororitas. The first Exorcists were produced in the Age of Apostasy on Mars, of which some from that period, known as the 'Prioris' pattern, still survived. These machines are highly venerated, although their Machine Spirits are known to be temperamental and require constant work and prayer. Each vehicle is regarded as a work of art, as much a symbol of the Emperor as a provider of long-range fire support.[2a]

While other patterns exist, such as the 'Sanctorum'[2a] and 'Dominica'[2d], they are not held in as high esteem as the original vehicles, blessed from the nearby divine presence of the Emperor when they were constructed. Adepta Sororitas never gave their Exorcists to another Imperium faction, like the Imperial Guard and the Space Marines, in fear that the machine spirits of this holy weapon would be tainted by non-believers and incure the displeasure of the Emperor himself.[2a]

The ancient, arcane technology of the Exorcist launcher is only vaguely understood by the Techpriests of the Adeptus Mechanicus.[1]

The missiles themselves are armour-piercing explosives and capable of annihilating enemy tanks or destroying squads of heavy infantry in a single salvo (assuming the launcher does not malfunction). Other payloads are available, including high-explosive or incendiary projectiles such as Conflagration Rockets, and anti-aircraft projectiles.[5]

Though potent, to the Sisterhood its primary purpose is to serve as a divine symbol of the power and glory of the Ecclesiarchy and serve as a mobile shrine for the Sisters of Battle. Each one is hand-crafted and unique.[3]

Some Exorcists are equippped with a hull-mounted Heavy Bolter; they may also be upgraded with Blessed Ammunition, Dozer Blades, Extra Armour, a Holy Icon, a Hunter-killer Missile, Laud Hailers, Pintle-mounted Storm Bolter, a Searchlight and Smoke Launchers.[2b]