The Exorcists are a Space Marine Chapter with a particular speciality in combating Daemons and the forces of Chaos.

The Exorcists are a Space Marine Chapter with a very dubious founding history. A highly secretive and silent chapter, little is known about their early days.[14] On the subject of their creation, a single communication remains, and was sent from a Genetor-Major of the Xenobiologis core, named Lauram Clelland. [13]

The Exorcists were formed as a successor chapter of the Imperial Fists[14] at the end of M35, or early M36, in the Thirteenth Founding (The Dark Founding). Created from resilient Gene-Seed stock, in the yearly years of the chapter they proved adaptable to many strategic challenges. However the fate of the Chapter dramatically changed after the events on Totem IV. During the campaign to liberate the planet from Daemons under the control of the Lord of Change Keriath the Shrouded, the Exorcists were able to prove resilient against hordes of Tzeentchian Daemons. Taking heavy physical damage but able to overcome the mental assaults of the Warp, at the height of the battle Chapter Master Enoch Trismegistus was possessed by Keriath. However Trismegistus was able to use the possession to awaken his own psychic abilities, reaching into the mind of Chief Librarian Goetos and gaining his aid in driving the Daemon out. Keriath was subsequently banished back to the Warp.[14]

The incident became known to the Plutonians, a Radical sect of the Ordo Malleus. The Plutonians relieved the Chapter Master of command and established a purpose-built facility on its homeworld of Banish. Here, Trismegistus was interrogated relentlessly, but eventually found to be pure. The Plutonians eventually revealed their theories of using the power of possession against the Warp, and Trismegistus found himself agreeing with the Radicals. Thereafter the Plutonians were allowed to remain on Banish permanently and aid the Chapter in its Daemonic Possession trials of Aspirants, hoping to recreate Trismegistus' experience to create an army of daemonically resilient warriors.[14]

One member of the Ordo Malleus' delegation on Banish, Cardinal Rodrigo Nessun, went mad after witnessing the high rate of failure of the early initiation process, turning to Chaos worship and fleeing with most of the Space Marines that couldn't be successfully exorcised, forming the Swords of Epiphany Chaos Warband.[11] 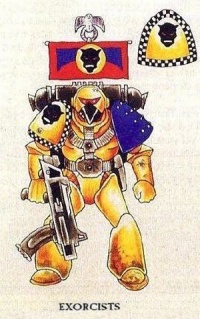 The Exorcists were involved in the Badab War against rebel Chapters.[4] The Exorcists are also one of only four Space Marine Chapters to have both fought in the Third War for Armageddon and against the Thirteenth Black Crusade.[2][3]

Later upon the formation of the Great Rift, a Torchbearers fleet bound for Banish met with intense Daemonic assault. The Rogue Traders with the fleet came to regard the mission as cursed, and all of its Greyshields fell in action. Even the Custodians of the fleet muttered that such attention from the Ruinious Powers was ominous indeed. However the fleet was eventually able to reach banish and present the Chapter with the technology to create Primaris Space Marines, though no living specimens remained. This suited the Chapter fine, as they were able to use their own Initiates to raise Primaris warriors under their own taboo methods. Thus far, Primaris Marines of the Chapter have not shown signs of incompatibility with the rites of Daemonic possession. Nonetheless, the Chapter's initiation rites left their mark on the Primaris subjects also. On battlefield where they fought alongside other Chapters whose battle-brothers had endured no forced exposure to daemons, subtle differences between the Primaris elements were apparent. Those the Exorcists seem more stalwart in the face of Warp entities, but they are also more prone to unexplained decisions and mood swings.[14]

The most notable trait of the Marines of the Chapter is the process they undergo known as "Daemonic Possession Therapy". Each Marine is, under very tight security, subjected to possession by a minor denizen of the Warp in an area of their Fortress-Monastery known as the Hall of Tempering[14]. The creature is allowed to remain within the host body for twelve hours until they are cast out by a Daemon Hunter. Some of the Marines are so damaged physically and psychologically that they have to be terminated. Most however survive and need only minor reconstructive surgery.[13]

After a minor period of recuperation the subjects are taught the ways of combating Daemons, trained in the use of the 666 verses of the Book of Exorcisms and equipped with the weapons of an Exorcist. To test their new creations, the Marines are put into combat on a Daemon World on the northern edge of the Eye of Terror. A squad of the Grey Knights are held in reserve, just in case they turned on their masters, while the Exorcist Space Marines achieve a kill ratio of 97:1. Most impressive, especially against Daemons. Test results show that their adrenaline production tripled and the levels of serotonin dropped drastically. This made the Marines much more aggressive and gave them increased combat effectiveness. Only 1% of the Marines fell to Daemonic infestation again, but the Imperial scientists believed they could eradicate the likelihood of this happening. On the basis that their souls are incorruptible and pure, they are effectively invisible to most warp daemons as their souls do not register for the leak of the mortal corruption. Only extremely powerful daemons are able to spot them.[13]

Those that fail the trials are known to suffer horrific fates that are not limited to permanent possession, transformation into Chaos Spawns, states of deathless torture, and broken minds. These individuals, dubbed Broken Ones, are sometimes used as prison-vessels to hold captured Daemonic entities.[14]

The Exorcists are a Codex Chapter, though they deviate in a number of key areas. The Chapter numbers twelve companies instead of the standard ten. They maintain two additional Scout Companies to have high influx of neophytes. Without such, the Exorcists will cease to exist due to their highly unconventional training methods.[8a]

Another prominent feature of the Exorcists are the Orisons, specialist cultists who dedicate themselves to particular fields of expertise or knowledge. The most renowned of the Orisons are the Enochian Guard, roughly equivalent to a Chapter's Veteran 1st Company.[8a]

The failed Aspirants of the Exorcists are dubbed the Broken Ones and are used in the Chapter's Daemonic possession trials. These are aided by the Plutonian sect of the Ordo Malleus.[14]

The Exorcists use a variety of esoteric titles such as Brother-Initiate, which signify membership to the secretive Orison Cults. These cults are an important part of Chapter identity, and they open their doors to any Exorcists who would consult their records or learn more of their traditions. These cults operate their own sub-cults and shrines, and its members reflect in different ways upon their duties as Space Marines while working to expand the bespoken libraries each Orison maintains.[14]

Certain Orison Cults do maintain historic association with certain battlefield roles, with many First Company veterans belonging to the Enochian Guard while the Obelisk Thelemus attracts many Techmarines and Devastators. The Broken Tower cult is almost exclusively formed from Librarians. Membership to one cult does not preclude membership to another, and highly regarded heroes of the Chapter may have a multiple of Orison honours to their name.[14]

Despite their similarities to the Grey Knights, the combat doctrine of the Exorcists differs greatly. Unlike the Grey Knights, the Exorcists possess no special resources other than hardened resolve to fight the Daemonic, and are more strategically flexible due to their adherence to the Codex Astartes. They are known for their effective reconaissance and large use of Scouts, deploying them behind enemy lines to collect intelligence. Indeed, many of these Scouts undertake combat duties that would normally be reserved to fully fledged battle-brothers. A favoured tactic is to work neophyte forces into positions where they appear vulnerable and then reveal them, drawing out the enemy by giving them a false sense of tactical advantage before crushing their advances with the full weight of the Exorcists’ main force. Since the introduction of Primaris Space Marines, they have made great use of Vanguard formations.[14]

Notable Elements of the Exorcists

In Headhunted (Short Story) — Heroes of the Space Marines (Anthology) it is said that Exorcists were created from the Geneseed of the Grey Knights.[6]