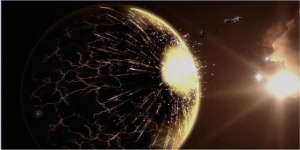 Exterminatus extremis[3] is the obliteration of a world's entire population through some form of weapon used from orbit or nearby space.

Exterminatus is the most extreme method of dealing with some form of heresy, corruption or alien infiltration which has taken root within a planet's population. Accordingly it is only used in the most extreme of circumstances, when the level of corruption a world bears is so monumental that it cannot be wiped out by any other means. The destruction of the entire population is deemed necessary to prevent the contagion from spreading further.[4]

Exterminatus is essentially one of the many tools in the armoury of the Imperium, used in those cases where complete destruction is deemed a better solution than conventional or covert methods. The world in question may have fallen to Chaos worship, or its Imperial government overthrown and replaced by the rule of aliens such as Genestealers, or it may be a non-Imperial world harbouring an extraordinarily powerful and dangerous species of alien. Exterminatus is often resorted to when the world is deemed to be not worth the amount of men and material that would be required to conquer or reclaim it. Exterminatus is very rarely used on planets vital or valuable to the Imperium. It has also been used as a method of denying resources to alien invasion.[5]

The Exterminatus order can be given by any Inquisitor, Space Marine Chapter Master, Lord High Admiral, or Lord Commander.[1] The Imperial Navy usually resorts to mass bombardment. Space Marines prefer to plant a bomb on the surface. The Inquisition has access to more exotic weapons such as virus bombs and cyclonic torpedoes.[Needs Citation] Its use is monitored by the Ordo Excorium.[12]