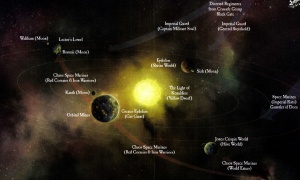 Eydolim is an Imperial Shrine World and was most notable for being the sight of the Battle of Eagle Gate in late M41. The capital of the world is the walled city of Eydol.[1]

A vastly populated planet ruled by the Adeptus Ministorum, Eydolim is considered a place of incredible holiness, the site of the Miracles of Lumina, the birthplace of Saint Konaldine, and a loyal bastion of faith during the Horus Heresy. Eydolim is an ancient world with a long history dating back to the Dark Age of Technology, which most of its history during this time having since been lost. It is known, however, that during the Great Crusade, the world was claimed for the Emperor by the Word Bearers under Kor Megron. Under the Word Bearers' direction, Eydolim was a bastion of fanatical and dedicated worship of the Emperor as a living god. When the Emperor put an end to these practices, Lorgar would eventually begin to worship the Gods of Chaos. Kor Megron and his company stationed on Eydolim followed suit, and left the planet to fight the Emperor they once worshiped. The forces of Chaos would only return to the world ten thousand years later in the Battle of Eagle Gate.[1]