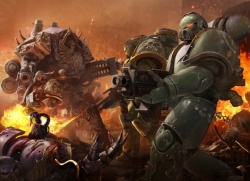 The Sons of Horus battle the Emperor's Children[3a]

The Legion War,[3b] also known as the Eye of Terror Slave Wars, were waged shortly after the end of the Horus Heresy in the Eye of Terror. The conflicts lasted for centuries, and greatly weakened the Traitor Legions.[6a]

The conflict saw the defeated Traitor Legions battle over slaves, resources, and worlds within the newly settled Eye. The Daemon Primarchs became increasingly withdrawn and concerned only with the affairs of the Warp and Great Game, making the Traitor Legion's leaderless and fractionalized. Hundreds of battles by scores of warbands were fought as most of the traitor legions lost any sense of cohesion.[5a] The Sons of Horus, having experienced a short-lived upsurge before the Legion War's outbreak, were particularily weakened by the fighting.[6a] Blamed for defeat in the Heresy as they were the first to retreat from Terra, the Sons were targeted the most by the other legions.[5a]

Much of the fighting was waged by the Emperor's Children, as the traitor Legion's excesses grew more uncontrollable, their supply of slaves (mostly acquired from Terra and other Imperial worlds as they fled into the Eye) became exhausted.[2b] Though they initially launched raids into Imperial space to aquire new slaves, these operations yielded not enough to satiate the sadistic legion.[6b] As a result, the Emperor's Children began to assault other Chaos Space Marine Legions within the Eye of Terror, plundering their own slave stocks for use in their perverse excesses.[2b] At first, the Emperor's Children proved remarkedly successful; even though their Primarch Fulgrim had mostly retired from leadership, the legion possessed a capable commander in Fabius Bile.[5b] Under his guide, the Emperor's Children destroyed the fortress of the Sons of Horus on Maeleum, leading to Fabius successfully cloning Horus.[5a][5b]

However, after the destruction of Maeleum, Abaddon formed the Black Legion from the shattered remnants of the sons of Horus as well as other warbands. He assaulted and destroyed the main fortress of the Emperor's Children and killed the clone of Horus.[5b] Abaddon went on to become the new Warmaster.[2a] Afterwards, the other legions took revenge on the Emperor's Children. The resulting wars were long, terrible, and bloody.[1][6b] A known action by the Emperor's Children in the Eye of Terror during these wars was the Battle of Skalathrax that saw the World Eaters shattered as a unified legion.[2b] In the end, the dwindling Emperor's Children Legion faced their inevitable defeat at the hands of their enemy Chaos Legions, shattering as an organized legion and breaking up into disparate warbands. It is said by the enemies of Slaanesh that during the conflict Fulgrim himself was killed, but the Emperor's Children themselves maintain he was given lordship by Slaanesh over a world of unending pleasure.[1]

However, the Legion Wars only truly came to an end when Abaddon and his new Black Legion managed to defeat their primary rival, Thagus Daravek of the Death Guard.[4]