From Warhammer 40k - Lexicanum
(Redirected from Eye of terror)
Jump to: navigation, search 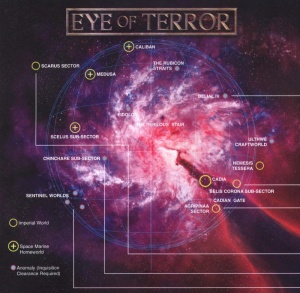 The Eye of Terror and its outskirts

The Eye of Terror (Ocularis Terribus, Anathema Nonplus Ultra (Ordo Malleus)[9]) is a massive Warp rift, where the Warp co-exists with real space, the largest and most well-known in the galaxy. It is located at the edge of the galaxy, to the north and west of Terra, in the Segmentum Obscurus.

The Eye of Terror is an area of the galaxy where the Warp and realspace overlap. A ship can enter the Warp without a Warp drive simply by crossing its border. The area used to be the domain of the old Eldar empire. When Slaanesh was born, the energy of her birth permanently breached the veil between realspace and the Warp, so now all the planets and stars that existed in that area are now within the Warp. These worlds have become daemon worlds. At the very center of the Eye lies the "byssos"[5], a hole in the fabric of reality through which raw Chaos energy pours out.[6]

Imperial ships avoid the area around the Eye for thousands of light-years. Ships traveling too close to the Eye can be thrown far off-course - they can also be caught in temporal whirlpools which carry them backwards or forwards in time, or which trap them in limbo forever.[Needs Citation]

Before the fall of Cadia

Many regions of the Eye of Terror are wracked by Warp storms. Others are calm enough for ships to travel through in a reasonably safe and predictable way, and an interstellar civilization of sorts (all devoted to Chaos) exists among these regions of the Eye.

Before the destruction of Cadia and the formation of the Cicatrix Maledictum, the perimeter of the Eye was thoroughly wracked by Warp storms that effectively formed a barrier that both trapped the Eye's inhabitants and kept out intruders.[10] The only safe and reliable opening in this barrier was the Cadian Gate, and that region was heavily defended and patrolled by the Imperium military.

The Eye of Terror is not a natural phenomenon. The Eye was created by the psychic shock wave that accompanied the birth of the fourth Chaos God, Slaanesh, during the Fall of the Eldar.[Needs Citation]

The shock of the birth was so great it could not wholly be contained within the Warp, but spilled out into reality through the minds of the Eldar. Consequently, the Eye covers most of the region of the former Eldar Empire. Other zones of overlap were created, but the Eye is the most significant.[1]

Sometime at the dawn of the Imperium but before the Horus Heresy, the Eye of Terror was discovered by Imperial explorers in what was presumably a fairly remote region of the galaxy, and Imperial scholars named is Cygnus X-1. The Eye didn't come into prominence until it was later discovered by the Word Bearers, who had arrived officially for conquest, but actually on a personal mission for renewed faith, and it was here that they discovered the "Primordial Truth". It would later be visited by the Emperor's Children and the Iron Warriors, intent on an expedition within the eye for the search of the Angel Exterminatus. Before embarking upon this journey, Perturabo had formally named the Eye of Terror.[7][8]

Notable worlds within the Eye of Terror

The Eye as a Refuge

The Eye offers a sanctuary to the worst forms of traitors and heretics forced to flee from Imperial justice.[Needs Citation]

For the Traitor Legions, the Eye of Terror has been their exile, sanctuary, and safe haven for ten thousand years, from which they strike out at opportune, seemingly random moments. The Eye is also sanctuary for the most heretical renegades, fugitives of Imperial justice, and traitors throughout the galaxy, and all are welcomed as fellow enemies of the Emperor and the Imperium.[Needs Citation]

Mortals within the Eye are constantly exposed to the effects of Chaos, physically warped so their bodies come to reflect their flawed natures; the Death Guard, for example, worship Nurgle, Chaos God of Decay, so that their bodies become bloated and putrid.[Needs Citation] 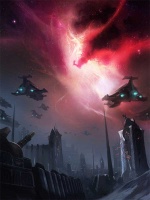 A view of the Eye from the surface of Cadia.
Main article: Cadian Gate

The Imperial world of Cadia lies nearest to the best-known stable gateway into the Eye; consequently, it is the most fortified and militarized world in the Imperium, the first line of defense against Chaos incursions into real space. It would seem that ships exit through this gateway far more often than they enter it.[Needs Citation]Abaddon the Despoiler led an attack through the Eye of Terror during a massive narrative campaign that decided the fate of Cadia and many other systems.[2][3]

Sectors and Subsectors surrounding the Eye of Terror

Due to the constant threat of raids and incursions, the Imperium is present in one way or another in almost every system within 500 light-years of the Eye. This presence can range from small listening posts to heavily fortified frontier worlds.[2][3][4]