Ezekiel is the Chief Librarian (or Grand Master of the Librarians) of the Dark Angels Chapter. His full title is Ezekiel, Grand Master of Librarians, Keeper of the Book of Salvation, Holder of the Keys. He is regarded by others of his chapter as the most powerful psyker in its ranks since the time of Lion El'Jonson.[2a]

Ezekiel was recruited by the Dark Angels on the world of Delphyna III in 516.M41 after it was conquered by the Chapter. During the conquest of the planet, the Dark Angels discovered a ten year old psyker of considerable talent imprisoned within the capital city's dungeons. Though physically frail, his psychic potential was enormous. Thus Ezekiel was admitted to train to join the Dark Angels Librarium, meekly submitting to every test and torment visited upon him by the Chaplains and Librarians.[1]

After years of training in the 10th Company Ezekiel was presented with the final test: surviving a mental assault by a senior Librarian that unleashed the victim's worst fears upon their own psyche. Ezekiel not only survived the mental terror attack unleashed by Librarian Meroth, but fully opened his mind to him and showed him his dark tormented past. Meroth was overwhelmed by the pain he experienced and collapsed. Thus was Ezekiel fully admitted as a Librarian.[1]

He lost his left eye at the Battle for Sularian Gate against the horde of Waaagh! Groblonik. His eye was quickly replaced with a simple bionic eye, allowing him to return to battle in time to lead a counter-attack which broke Groblonik's army. Since then, he has refused to have it replaced for a more sophisticated and less noticeable one as a mark of respect to his fallen comrades. During the battle, Ezekiel displayed immense psychic power against the Ork Warboss and his hordes. Such was his accomplishment that the previous Dark Angels Grand Master of Librarians, Danatheum, stepped down and allowed Ezekiel to take his place.[1]

It is one of Ezekiel’s many tasks to test the loyalty and dedication of any who rise to the rank of Master or Grand Master, to seek out weakness and ensure that they are pure of purpose. So intimidating is this prospect that fully a third of the Dark Angels selected for such promotion have politely refused the honour and chosen to remain as warriors of the Deathwing, Ravenwing or as Veteran Sergeants. Perhaps the cause for this is the case of Sergeant Cadraellon, who was selected to become Master of the 10th Company not long after Ezekiel’s accession. Ezekiel probed Cadraellon’s thoughts and memories for a day and a night. As soon as the Chief Librarian finished, the prospective Master drew his pistol and killed himself with a bolt through his temple. Ezekiel claimed he had seen nothing that would have prevented Cadraellon’s promotion to Master, but there are those that think it unlikely the Chief Librarian’s prophetic abilities would have failed to foretell such a devastating consequence. Whatever the cause, the incident has ensured that only those truly pure of heart and intent consider themselves worthy of leadership.[1]

Ezekiel's wargear includes an ancient set of Artificer Armour named Secret's Shield and the Deliverer, a master-crafted bolt pistol that has killed many Fallen Angels. The most ferocious and sinister of his weapons, though, is the force sword Traitor's Bane, which is rumoured to trap the souls of the Fallen he faces. The Book of Salvation, which he carries at all times, causes all Dark Angels in his presence to be fearless in battle.[2b]

He also carries the Keys which open the doors around the Rock, including the Tower of Angels, the cells and dungeons of the Fallen Angels, and the cell containing Luther himself.[Needs Citation] 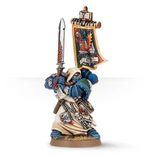 Ezekiel is named after the Prophet from the Book of Ezekiel in the Jewish Bible, who prophesised the Destruction of Jerusalem (Drawing parallels against the destruction of Caliban, or the possible destruction of Terra or the Imperium). Ezekiel means "God will strengthen".