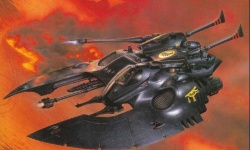 Eldar Falcon soaring through the clouds

The Falcon Grav-tank is a versatile vehicle used by the Eldar both as a transport and main battle tank.[1]

Its name is a rough translation of Faolchu, who in Eldar mythology was the consort of the Great Hawk and during the War in Heaven retrieved the sword Anaris from Vaul, thereby enabling Eldanesh to continue his combat with Khaine. This principle of delivering the sword is represented in the Falcon's design, taking the fight to the enemy and retrieving beleaguered troops if the combat becomes too fierce.[1][2][3a]

The anti-gravitic generators which give the Falcon its amazing speed and agility are prime examples of the Eldar's technological mastery. Thanks to these powerful devices a Falcon can achieve speeds of up to 800 kph and soar to altitudes much higher than the equivalent Imperial craft, giving it limited flight capability. The Falcon's crew of pilot and gunner will themselves be veteran pilots, having learned their craft either on Eldar Jetbikes or along a similar Path, and take full advantage of these abilities, hiding within cloud cover only to swoop down on their pre-selected targets at high speed to deliver death and destruction.[2][3a]

The Falcon's weapon systems can be tailored towards fighting in any role. In addition to the standard Pulse Laser the gunner's turret can mount a Scatter Laser or Shuriken Cannon for mowing down infantry, a Starcannon to deal with light armour, or a Bright Lance or Missile Launcher for increase anti-tank firepower. Twin-linked Shuriken Catapults located beneath the pilot's cockpit can also be switched out for a single Shuriken Cannon, while the craft can be further upgraded with a Holo-field, Spirit Stones, Star Engines and Vectored Engines.[2][3a] Like all Eldar vehicles the Falcon is constructed from Wraithbone and other psycho-plastics, lightweight material which is incredibly strong and specially attuned to the Eldar's psychic abilities. This not only allows the vehicle to be controlled with both mind and body, but makes it impossible for other races to duplicate or operate the vehicle.[3a][3b]

The crew compartment on the Falcon is located in the rear of the vehicle and accessed by a single door. Though capable of carrying up to six fully-equipped Eldar, such as Guardians and Aspect Warriors, it is unable to carry larger constructs like Wraithguard.[2]