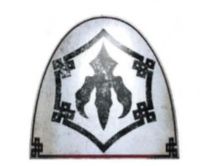 The Falcon's Claws (or Burgediin Sarhvu[2]) were White Scar warriors during the Great Crusade and Horus Heresy.[1]