The Fall of Prefectia was a confrontation between the Imperium and Tau Empire in the closing years of the 41st Millennium during the Tau Third Sphere of Expansion.[1i]

Following the decisive Tau victory at the Battle of Mu'gulath Bay, Tau Supreme Commander Shadowsun immediately began planning a new general offensive, this time aimed at the Dovar System. She became even more motivated following her defeat at the Battle of Voltoris, determined to regain the initiative. The Dovar System included the Gilded Worlds, a system impossibly rich in precious metals. The Imperial world of Prefectia was the ideal staging ground from which the Tau could engineer the fall of the entire Dovar System. However Prefectia was rich in Geomagnetic energy and on the borders of the Eastern Fringe, and thus Imperium had turned the world into a planet-sized Fortress.[1i]

The Tau were at a slight advantage after Mu'gulath Bay and Voltoris, for the Imperium had transferred much of Prefectia's garrison to wage these campaigns. Surprisingly, Imperial officials were in many ways glad at the Tau decision to not steer further towards Dovaris, and settled in for a new round of fighting.[1a]

The war for Prefectia started with a single mission, launched on the orders of Raven Guard Chapter Master Corvin Severax himself. The Raven Guard 5th Company under Shadow Captain Solaq successfully ambushed a Tau aerial convoy in low atmosphere over Prefectia, downing the personal Orca of the Ethereal Aun'Do. The Ethereal managed to eject to safety, and a frantic hunt by both sides began to see who could recover the valuable leader first. Solaq soon launched a series of interlocking raids against the Tau who were scrambling to retrieve their downed leader. However in many instances the Raven Guard was blunted by Infiltration Cadre's of Shas'ui Starshroud, who soon revealed himself to be as skilled in guerrilla war as the Raven Guard.[1a]

A final great clash in this hunt erupted on the ash-strewn wilderness of Prefectia, with Solaq finally cornering Aun'Do. Just as the last of the Ethereal Guard fell, the Ethereal managed to activate a force shield to protect himself long enough to be air-lifted to safety by Orca. Solaq was seething with fury.[1a]

Meanwhile, the Tau began a series of strikes throughout the worlds surrounding Prefectia, attacking Doth, Delinquence, and Carradon. An expeditionary force under Ethereal Supreme Aun'va himself made rapid headway into Imperial territory and the Imperial Guard and Imperial Navy found it difficult to stop. On Prefectia itself, reinforcements were already inbound in the form of Raven Guard under Kayvaan Shrike and the White Scars under Kor'sarro Khan. Both commanders were eager to attempt to find and assassinate Shadowsun herself.[1a]

The White Scars soon struck after landing on Prefectia, attacking Tau outposts outside of Atlassi Hive in the Southern Scars. Shadowsun used a series of interlocking Kauyon traps focused around fortified Tidewall positions around Atlassi's main highway to slow down the Scars advance. Battlesuit ambushes managed to outflank the onrushing Scars and trap their convoys.[1a] Wherever the Astartes broke out their killzones, Shadowsun would used hidden Cadre's to push them back in.[1b] However Kor'sarro was able to use a three-pronged Landspeeder and Bike attack on a single Tau outpost to create an opening and strike towards the Siphonid Complex.[1b]

At the complex, the Scars fell into another trap when Shadowsun collapsed her own Tidewall defenses onto Kor'sarro and his Terminators using Stealthsuit Teams. They then came under attack from a Riptide, forcing the Scars to call in air support and driving the Tau away.[1b]

Meanwhile, it was up to Shadow Captain Kayvaan Shrike to find a weakness in the Tau defenses. The heavy-defended shield zones of the Fortress World burned as eight Chapters of Space Marines launched assaults against the forces of a dozen Septs upon the planet. Shrike's forces under Chaplain Laefin Torovac encountered the Tau outside of Aquillon Hive and launched an ambush. Though the shocked Tau Hunter Cadre fought well, their officers were soon picked off by Raven Guard Scout snipers. However this was revealed to be a Tau tactic of misdirection, their "officers" had in fact been decoys of and a force of hidden Kroot assailed the Raven Guard, forcing them onto the defense. Calling in Stormtalon air support and air-dropped reinforcements, but these were intercepted by Razorshark fighters. The Raven Guard on the ground were in a desperate struggle for survival and took heavy losses.[1c]

Meanwhile, Kor'sarro Khan continued his hunt for Shadowsun, who appeared to be commanding from every frontline simultaneously. Shadowsun used her primary lieutenants, Commander Swiftflame and Commander Sternshield, to bait the Imperials at every turn and cause misdirection as to the Tau's true intent. After Sternshield managed to ride his Coldstar Battlesuit into orbit and attach a scanner to the Imperial Navy ship Duty's Cull, the Tau were able to intercept Imperial communications.[1e]

Perhaps as a punishment for conducting this operation without her permission, Shadowsun had next had Sternshield undertake the dangerous task of engaging and occupying the White Scars. Sternshield intercepted a Scars gunship squadron but suffered heavy losses by their Stormseers, which the Tau referred to as "Mind Science" and had little countermeasure against. The Stormseers under Guludhei summoned a physical storm as the aerial battle raged. Below, a ground battle broke out and the White Scars ran amok thanks to the lack of Tau air support. With the Tau cornered, White Scars Hunters were able to fire surface-to-air missiles at Sternshield. Sternshield's Battlesuit was horrifically damaged, but he survived.[1e]

Elsewhere, Shadowsun tasked Swiftflame with engaging the Raven Guard around Ventur Scar. The Sons of Corax were inflicting heavy losses on Air Caste patrols and convoys, gaining the attention of Admiral Skychild. Swiftflame was able to eventually intercept the Raven Guard Gunships, using a single Razorshark as a lure. The ambush worked, and a vicious aerial battle erupted that saw the Raven Guard escape thanks to the arrival of Thunderhawks. Soonafter Swiftflame was forced to withdraw as well and for the next several days the dance of trap and counter-trap continued between the Tau and Raven Guard.[1e]

Chaplain Torovac was able to move back to Atlassi Hive, having his Techmarines repair its Macrocannon battery. Using his scouts and reconnaissance aircraft, Torovac turned it into a mobile artillery piece that rained death on any Tau position he was able to identify. This forced Swiftflame to dispatch Pathfinders into Atlassi. The Pathfinders instead fell into a trap, the Raven Guard detonating a portion of the Hive and burying the infiltrators. After the loss of several Stealthsuit Teams, Swiftflame decided to personally lead six Breacher Teams into the Hive. Swiftflame was successful in disabling the Raven Guard position, but at high cost.[1e]

Amid these difficulties, it became apparent to the Tau that Prefectia would not fall in a lightning-fast blitz as they had hoped. An embarrassment for Shadowsun took place when Aun'va himself appeared on the front to inspire his troops, while Raven Guard Chapter Master Corvin Severax arrived to personally finish the fight. Shadowsun's stare was on the wane, the war was becoming prolonged and she was constantly on the move to escape her White Scars and Raven Guard pursuers.[1f]

Severax planned an elaborate ambush to personally slay Shadowsun, but disaster struck for the Imperium when Severax instead slew a decoy before he was struck down by a cloaked Shadowsun inside a Ghostkeel battlesuit. The Raven Guard was sent reeling by the lost of their commander[1f]. Soon enough the Tau hold on Prefectia was growing stronger with each day, the Raven Guard reduced to carrying out revenge killings. Due to their heavy losses, the Imperial Navy landed transports to withdraw the Astartes contingents from Prefectia. In their place came massive amounts of Imperial Guard. Nonetheless the Imperial evacuation was hampered by Tau attacks, which struck at many of the landing convoys. Only the Knights of House Terryn under Tybalt himself were able to prevent a disaster.[1f] 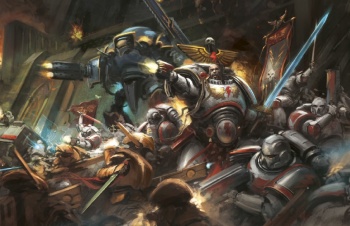 The White Scars and Knights battle the Tau

Meanwhile, Shadow Captain Shrike was determined to exact vengeance on Shadowsun for Severax's death. In their hunt for Shadowsun Shrike and his squads were eventually able to destroy several Ghostkeel's by using their own fire against them, as their defensive countermeasures did not register friendly weapons. Shadowsun was unable to be caught, but Shrike was able to make it to the site of Severax's death and secure the Gene-seed of the fallen. For this, he was elected by the Company Captains as the new Chapter Master of the Raven Guard.[1g]

Shrike set to work on solidifying the alliance between the remaining Raven Guard and White Scars forces on the planet. The two Chapter's played off each others strengths to score several stinging defeats on Tau Cadres from Vior'la and T'au. Shrike used the electrodam of Brutec Nexus to unleash a storm of energy across Prefectia's fissure plains, revealing and destroying many Cadres in waves of geometric instability. The Tau quickly struck at the dam complex in the tens of thousands, running into another storm created by White Scars Stormseers. House Terryn Knight's landed directly into the fray via bulk lander, and a vicious duel between Knight and Riptide teams erupted. The Riptides took heavy losses, and flanking attempts by Hammerheads, Broadside Battlesuits, and Sniper Drones were blocked by Space Marines. Only the arrival of Tau KV128 Stormsurge Battlesuits were able to prevent a Tau collapse in what would be called the Battle of Goliath's Eye. Nonetheless even these mighty suits took losses, most infamously at the hands of electricity-wielding Stormseers. However the Tau were able to focus their Ballistic Suit fire upon the Knights, slowly turning the tide and House Terryn was forced to retreat back into their bulk landers. The Raven Guard and White Scars withdrew shortly after.[1h]

Soon enough a surge of Tau reinforcements were able to land, bringing Stormsurge's to every major front on Prefectia. The suits were instrumental in blasting apart Imperial defenses and Hives, allowing for the Tau holdings on the planet to increase. With too many of their assets lost, the Astartes could not contest the Tau advances. Day by day the last Imperial strongholds fell, and the Ethereals declared Prefectia won. It was renamed Vas'talos in a grand celebration ceremony. Across the Tau Empire, propaganda portrayed this victory as their greatest yet. Shadowsun's image was boosted to the public and Ethereal Council alike, and she became a hero to the Tau. Tau propaganda broadcasts were kept on a loop for days afterwards as the Water Caste attempted to maximize the media value of the Prefectia victory. However to the Adeptus Terra, Prefectia had been of little strategic value and it was considered a minor loss on a minor front. The Imperials instead focused on reclaiming Agrellan.[1h]

Aun'var decided to divide his expeditionary force, one half pushing further into the Dovar system and the other returning to Mu'gulath Bay to ensure his supply routes remained intact.[1h]

Meanwhile, news of the "Great Victory" reached the Farsight Enclaves, and a legendary leader gathered his people for a war that would change the history of the Tau forever.[1h]