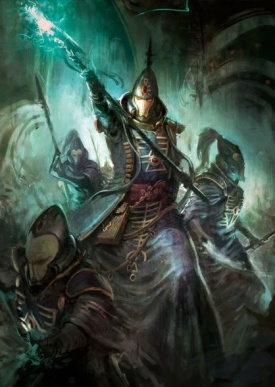 Farseers are the most powerful of all Eldar psykers. They are most often known for using their vast psychic powers to see the possibilities of the future to be able to manipulate events to better ensure the survival of the Eldar.[Needs Citation]

They are amongst the most powerful of Seers and every Craftworld has a handful of Farseers among their number. Much of their time is spent in a trance-like state where their spirits roam at will throughout the Wraithbone where they direct the psychic-energy flow throughout the entire Craftworld. As such, they are not normally in a waking state though their visionary skills allow them to direct their fellow Eldar in avoiding dangers that can fall upon the Craftworlds. This is by way of exploring potential future paths that lie ahead and determining which paths need to be altered. Their duties mean that Farseers normally do not fight the wars of the Eldar but in times of desperate need, they can be seen on the battlefield where they use their incomparable power to aid their race in combat.[1] Eldar armies are sometimes accompanied by a single Farseer, which is due to the fact that more cannot be spared as they are tasked with guiding the future of their Craftworld. However, their powers are greater than Warlocks although are concentrated on casting Seer Runes to determine courses of action that would be most fortunate for their forces.[2]

Typically, after a number of years, Seers pass to some other life as part of their quest to explore the rich possibilities of the Eldar Path. However, some amongst their number can end this journey by adopting the mantle of the Farseer, which leads them being trapped on the Witch Path and thus unable to change their future role. Thus, these individual Eldar focus their remaining years on learning and exploring their psychic powers. Much of their time is spent casting Seer Runes whilst making endless calculations and prognostications where they attempt to guide the fortunes of their Craftworld. This sees them attempting to discern and anticipate the future by watching out for difficulties that lie ahead in coming events. As their calculations are based on predicted events that can be hundreds of years into the future, their immediate effect can be hard to determine. Despite this being the case, Farseers are seen as a vital part of a Craftworld who base all their political decisions around their predictions.[2]

A Farseer of the Craftworld Ulthwé

Farseers are unparalleled masters of divination, interpreting one future from a myriad of possible ones. It is they who direct their people, protecting them from disasters that have not yet occurred, and protecting the existence of the race as a whole. Without them, the species would surely be extinct. Their abilities are not always limited to the interpretation of events to come, but are also some of the most potent psykers in the Galaxy, capable of crushing lesser minds to pulp with but an effortless whim.[Needs Citation]

As Farseers grow older, their minds become so intertwined with the wraithbone core of their Craftworld that their physical bodies become dormant. Those of great age typically retreat into the Dome of Crystal Seers where their bodies begin to crystalise. During this gradual process, a Farseer takes root amongst the trees of the biodome and eventually turns entirely into crystal. In this state, their spirit is freed into the Craftworld itself where it is preserved forever within the psycho-conductive wraithbone Infinity Circuit. This fact sometimes leads to Eldar wandering into the Dome in order to see the Farseers of Old, whose bodies are preserved in the wraithbone tree glades.[1]

Farseer on the Eldar Jetbike is called Farseer Skyrunner.[7]