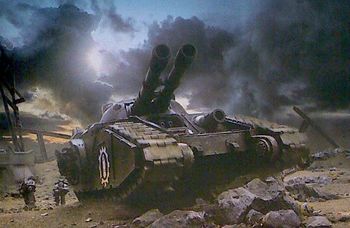 The Fellblade was most notable for its use of both Mechanicum atomantic arc-reactor technology and a reinforced metaplas alloy chassis superior to that of the Baneblade. It mounted a twin-linked Accelerator Cannon as its primary weapon and would also take to the field equipped with a suite of secondary weapons: a demolisher cannon, sponson-mounted quad-lascannons or laser destroyers, hull-mounted twin-linked heavy flamers or heavy bolters, and a variety of pintle-mounted weapons.[3]

As of M41, the Fellblade is all but unknown to the Adeptus Astartes and very few are still in service.[6a] The last known reference shows that, as of early M40, less than 100 Fellblades are known to have been produced in the last 500 years.[6b] 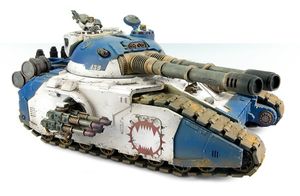 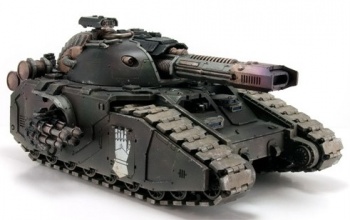 The Glaive Super-heavy Special Weapons Tank or Fellglaive, was a variant of the Fellblade, armed with a volkite carronade, designed to destroy xenos beasts and enemy light vehicles. Its primary weapon is so fearsome that the Techpriests of Mars only agreed with some acrimony to the Emperor's demand that a tank be armed with it. Though all eighteen Legiones Astartes received limited quantities of Glaives, the Salamanders and Dark Angels were noted to operate them more regularly. Its rarity was because the Glaive was complicated to produce and staggeringly expensive.[4][5] The Dark Angels were given specialized Fellglaives for use in the Dreadwing which were designed by the Emperor's greatest armourers. These vehicles were equipped with Vortex Weapons in place of its volkite carronade.[8]

The Glaive first saw use against the Apex exo-Chthon which had previously proved a thorn in the Great Crusade's side. Later they saw use against Orks and various other xenos monstrosities during the surrounding of the galactic core.[5]

Fellblades are still used by Chaos Space Marine warbands, but have long since been corrupted by the Warp and Dark Mechanicum. Many have since become possessed by Daemons and are required to be chained down outside of combat, lest they lash out at those around them. Most are relics of the Great Crusade and thus are most commonly seen among the original Traitor Space Marine Legions.[7]