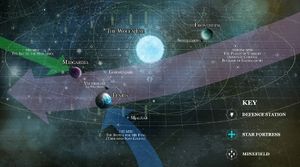 The Fenris System is a system of Imperial space in Segmentum Obscurus. It is home to Fenris, the homeworld of the Space Wolves.[1]

At the heart of the Fenris System, a powerful sun burns as fiercely as the warrior spirit of Leman Russ. Known to those born on Fenris as the Wolf's Eye, the gravitational pull of this mighty star endlessly hurls forth the planets that surround it far into the Sea of Stars before hungrily drawing them close once more. So do they all share an elliptical orbit around the Wolf's Eye, testing the planets' inhabitants with seasons of merciless extremity, and nowhere is this adversity more evident than on Fenris itself.[1]

As with any region of space that plays host to a Space Marine Chapter, the Fenris System sports formidable static defences and an incredibly powerful battlefleet, making any attack in its vicinity an act of exceptional bravery or one of grave foolishness. Only three times in more than ten millennia has the Fenris System been assailed directly by enemy forces with strength enough to prevail.[1]