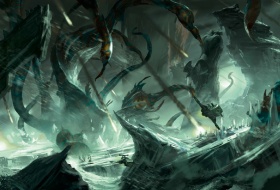 Kraken are the most terrifying monsters that inhabit the oceans of the planet Fenris. A full-grown Kraken can measure five miles long, with tentacles four times that length.[1a]

The origins of the Kraken are unclear. Some speculate that they are the remains of a Tyranid bio-weapon from an ancient Hive Fleet invasion of Fenris. Others say the monsters are as old as Fenris itself, and the oldest of them gnaw at the roots of the world.[1a]

Kraken are highly dangerous, and often attack the ships of Fenris's human inhabitants, on their frequent sea-born migrations.[1a]

Another legend holds that the Wolves' primarch, Leman Russ, went fishing one day and caught the Father of Kraken, but threw it back, declaring that it was too small and he would return one day and catch it when it was full-grown. Since then, the legends say, the Father of Kraken has grown until its tentacles encircle the entire planet. Within the Trophy Halls of The Fang, is a giant leathery piece of flesh, over fifty feet in length, known as the Kraken's Egg. Whether it really came from a Kraken or not is uncertain, but it gives some credibility to the legend of Russ, which might otherwise be considered entirely apocryphal.[1a] Members of the Magos Biologis have examined the Egg and say it is Tyranid in origin, suggesting that the Kraken may be descended from an early visit by the Hive Fleets.[2]

Arjac Rockfist, a Wolf Guard and the personal champion of the Great Wolf, Logan Grimnar, won his position after defending the Iron Isles from an attack of a thousand kraken-spawn, virtually single-handed.[1c]