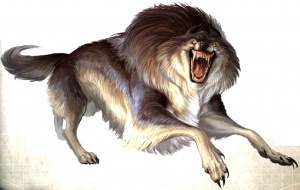 Fenrisian Wolves are unlike any other wolf. They are at the top of the food chain on the harsh world of Fenris, and are among the most cunning and dangerous predators in the galaxy. The sheer diversity of Fenrisian Wolves is enormous. Adult Wolves can reach the size of horses, the greatest approaching the size of a Snow Lion[10] or Rhino armoured carrier.[11][12] 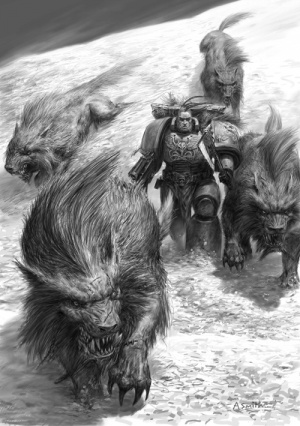 A pack of Fenrisian Wolves led by a Space Wolf[3a]

If a Space Wolf slays the alpha male of a Fenrisian Wolf Pack while undertaking the ritual of the Lone Hunt, the surviving wolves will treat him as their new pack leader. Many will form a lasting attachment, and fight at their master's side until death.[3a]

The lost 13th Great Company are also accompanied by wolf packs made up of the descendants of the Fenrisian Wolves which followed the Space Wolves to combat thousands of years before.[2]

As a symbol of the Space Wolves frozen homeworld they often befriend and are trained by Space Wolves Battle Brothers.[4]

The wolves are loyal to their masters, whining if they are forced to stay behind on the frontline, or attacking with a gesture or a word. If a battle-brother falls the wolf will try to protect the body at all costs or drag him to safety.[4]

The wolves are a point of conflict between many chapters and the Space Wolves, especially when they have to squeeze into a Rhino with one or suffer it's panting during a tactical briefing.[4]