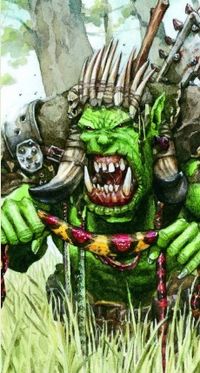 Feral Orks appear after a Waaagh! has passed through a planet.[1a]

While most Orks leave with their Warboss to find more warfare, some Ork spores are left behind on these worlds. If the spores manage to survive in harsh environments, they will then grow into Feral Ork tribes. Like most Orks, Feral Orks favor close combat, although they are significantly less capable of shooting. This is because Feral Orks, being almost completely left behind by their more advanced brethren, make use of crude technology, employing boars, traps, and massive Squiggoths in attacks.[1a]

Feral Ork tribes usually take the name of the deadly beast that posed them the greatest threat before they became "kultured". While the biggest and baddest tribesmen bully themselves into taking the share of meat from prey, it falls to the smaller Orks to do most of the hunting. As the tribe expands and claims more territory, they will inevitably clash with other races. This takes the form of small outpost attacks, then raids, before finally full-scale invasions. Feral Ork Waaagh!'s have been observed, and are said to be unstoppable once it gains momentum. Once all non-Orky opposition has been destroyed, the Feral Orks will begin to attack each other with savage abandon.[1a]

Feral Orks are known to use primitive weapons such as simple metal or stone Choppas and spears. However they have also been observed with standard Sluggas and Shootas,[1b]. Feral Orks rely heavily on beasts of war such as Squiggoths and Orkeosaurus'[1b], but have also been observed using steam-powered vehicles and even Steam Gargants. These are maintained by Boiler Boyz.[2b]

Vehicles, Beasts of War, and Artillery[1b]