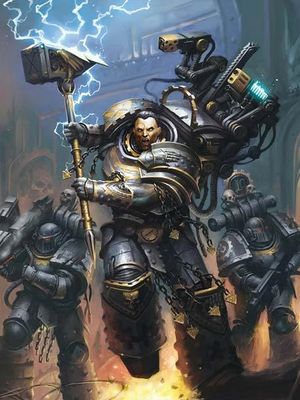 "If fighting is all there is, if we may never pause to reflect on what such devotion to strength is doing to us, then our compulsion will only grow. Already I see the madness that path leads to, and so I shall excise the silver from my hands. In doing so I shall weaken myself and my sons, but nonetheless it must be done. The hands are strong, and have created great things, but they are not mine."[17]

Ferrus Manus, (literally "Hand of Iron") the Gorgon[3], was one of the twenty Primarchs created by the Emperor before the Great Crusade. He led the Iron Hands Space Marine Legion. During his time on the world of Medusa Manus' hands became encased in a hard metallic substance, and he became known for his iron-resolve and disdain for weakness.

Ferrus was stolen away by the forces of Chaos, just as his brothers were, and spent his first years on the planet Medusa. As a youth, he discovered an "X" mark on the pod that first brought him to this world and that the chamber was too precise to be a natural formation. Exploring further, he discovered runes and electro-conductive stalagmites all around the chamber. His inspections awakened an imprisoned colossal bio-mechanical worm-like creature, which attacked him and escaped, ignoring his attacks. He followed its path of destruction and swore he would destroy the beast he had unwittingly released. When he reached the surface, he saw other men in the distance but wouldn't reveal himself to them, instead keeping his recent oath in mind.[4] Over time, Ferrus had gained a significant legend to the Clans of Medusa. The storm giants of the Karaashi Pinacle called him The Cataclysm. Due to his unleashing of the wyrm, he was also known as the Hunter. The phantasmagoria dubbed him The Finality. The mecharachnis and phasewraiths that sought him out had seemed to classify him as the Rehew Netjer or Son of Man. Meanwhile, the Subliminat had called him Flesh.[15]

Years later, Ferrus walked unscathed and fully formed from the mountains where he encountered the roaming clans and tribes of Medusa. Ferrus would not join these tribes, as many of his brothers did. Instead, he sought out physical challenges to make himself stronger and more resilient. These tests ended with his battle against the Great Silver Wyrm Asirnoth, a metallic beast impervious to harm; Ferrus had to drown it in magma to kill it. The melted flesh of the wyrm fused to Ferrus's flesh, giving him the true metal hands his Legion would take its name from. Ferrus returned to the tribes and lectured them on technology. The clans advanced at a stunning pace and Medusa prospered, but Ferrus took care to leave the inter-clan rivalry and fighting by never taking sides, as he saw the competition between them as healthy and good.[12] 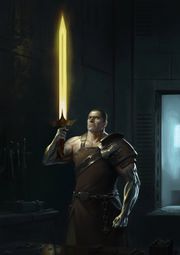 The Emperor eventually came to Medusa and Ferrus Manus tested himself on him in a cataclysmic battle that is said to have lain waste to entire mountains. Finally having found someone equal, Ferrus accepted the Emperor as his master and took command of a legion of Space Marines.[12] Ferrus met his brother Fulgrim early on and initially was disdainful of the Phonecian's appreciation for art and culture, seeing it as a waste of time when a Galaxy needed to be conquered. Fulgrim jokingly referred to Ferrus as The Gorgon, a reference to the mythical Terran creature whose ugliness turned men to stone. The title ultimately stuck.[2b] 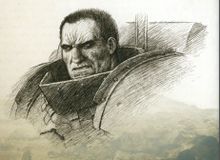 Thousands of planets would fall to the remorseless Iron Hands under Ferrus's leadership. Each weak link in humanity was to be purged if mankind was to grow stronger. Scholars spoke of the wave of piety and faith that spread before the Iron Hands, with many planets suddenly motivated to look into themselves when they heard that the Iron Hands were approaching[Needs Citation]. During the Great Crusade the Iron Hands battled the Human Diasporex alongside the Emperor's Children. This was symbolic of the bond shared by Ferrus Manus and the Emperor's Children Primarch Fulgrim, who were close friends.[2] However during the Conquest of One-Five-Four Four he received visions from the Eldar alluding to his eventual demise at Fulgrim's hands. Distrustful of the Xenos, Ferrus rejected the prophecy.[11]

Ferrus was one of the four primarchs privately referred to by Roboute Guilliman as "the Dauntless Few", the four of his brothers who most exemplified their father's design and whose Legions reflected their best qualities (the others being Rogal Dorn, Sanguinius, and Leman Russ)[5]

And of them, Manus was the key. Implacable. Unshakeable. If he was at your side, he would never break.[5]

Once swayed himself to the side of the Warmaster, Fulgrim approached Ferrus Manus before the heresy and tried to lure him to join Chaos. Ferrus Manus was so enraged at this proposal that he attacked Fulgrim. A short duel took place, where Ferrus destroyed Fulgrim's sword Fireblade, the same weapon Ferrus had given to him many years before. Fulgrim escaped after rendering Ferrus unconscious, leaving him alive but taking with him the massive Thunder Hammer Forgebreaker he himself had crafted for his brother.[2]

The Iron Hands were one of the loyal legions the Emperor called to Isstvan V. Given the large distance, Ferrus Manus took the Legion's fastest ships and departed only with his veterans. Most of them died in this battle, when following the loss of their primarch they were struck down by the traitor legions, caught between the hammer of the Emperor's Children and upon the Anvil of the four support legions of the second wave. [2]

Fulgrim personally killed Ferrus during the battle at Isstvan V, using the daemon weapon he acquired fighting the Laer to strike his head from his shoulders in one fell swoop. Fulgrim, distraught with grief that his closest brother was dead by his own hand, was soon thereafter possessed by the daemon within the sword. The possessed Fulgrim then delivered Ferrus's head to Horus.[2]

When Guilliman heard reports that Ferrus had fallen, along with Vulkan and Corax, he lamented that, of the three, he would miss Ferrus most of all.[5] 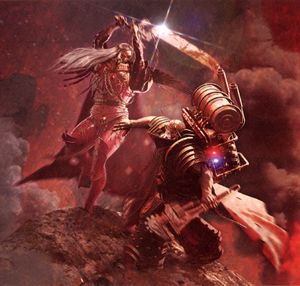 Ferrus Manus and Fulgrim in a duel[2a].

Later during the Heresy as Horus fell deeper and deeper into Chaos and his mental state perhaps began to deteriorate, he took the skull of Ferrus Manus, mounted it on his throne, and began to increasingly speak to it. During their one-sided conversations, Horus lamented that he only had bloody-handed tyrants, mass murderers, and daemons for his generals instead of strategists and men of duty like Ferrus.[9]

During the final climatic struggle of the War Within the Webway, the Emperor summoned the souls of fallen heroes of the Imperium to serve as an army against the Daemonic hordes. Ferrus was reanimated as a blazing spectre and briefly fought at the Emperor's side.[13]

Since the Horus Heresy, Clan Kaargul maintains that Ferrus Manus will return one day when the Imperium needs him once more. To this end they maintain eternal warden over the Karaashi Heights of Medusa awaiting his return. The other Clans do not have the heart to impede the Kaargul in this, for as long as they maintain their vigil hope remains.[16]

Ten thousand years later in the 41st Millennium, a daemonette of Slaanesh taunted Iron Hands Sergeant Naim Morvox on Shardenus, claiming that it had seen Manus's head, and "it is still screaming."[6]

'On the eighteenth day of Nureg, the Guardian of Terra did alight on Draor and there was a great star-fire in the heavens as seven ships of gold descended. And, lo, did the men of Iron kneel to his will and the will of the Avenging Son. He brought his word and his bond, but it was the gift of bone the men of Iron took heed of. And so reunited with their patriarch was a pact with the men of Iron sealed and the Imperium of Man reunited. Never again would it be put asunder.’ [7]

On the world of Draor, Inquisitor Kinebad, accompanied by a companion named only as 'Scar-borne', uncovered an ancient Obelisk detailing a pact made between Guilliman, Dorn and the Shattered Iron Hands legion. In return for their adherence to the nascent Codex Astartes, the Iron Hands were returned the Skull of Ferrus Manus. How exactly Guilliman and Dorn retrieved the skull is unknown.[7] As of M41, Ferrus’ skull is rumored to be at the center of the Eye of Medusa upon an altar watched over by a Helfather who does not eat, drink, sleep or blink in his ceaseless watch of the Primarch.[18]

Following the Drop Site Massacre, a mentally volatile Fulgrim would have Fabius Bile clone Ferrus. However these clones proved unstable and each refused to turn against the Emperor, forcing Fulgrim to once again kill his brother and driving him even madder.[8]

Though not a clone, a group of extreme Iron Fathers of the Iron Hands calling themselves the Cult of the Gorgon attempted to resurrect Ferrus shortly before the Siege of Terra. In an attempt to control the Iron Hands remnants and oppose the legitimacy of Shadrak Meduson, the Cult of the Gorgon somehow acquired one of the metallic arms of Ferrus and attached it to a heavily armored and cloaked mechanical puppet. This shameful construct was destroyed by Vulkan.[14]

Ferrus Manus' primary weapon was the gigantic Thunder Hammer Forgebreaker, crafted for him by Fulgrim. Manus wore a finely-wrought suit of Cataphractii Pattern Terminator Armour known as the Medusan Carapace. More than a simple suit of armor, it possessed many servo mechanisms and support systems.[10] He was also seen fighting with a wrench-shaped Power Weapon.[2]